It’s Audacity Chutzpah! What Are You… Waiting For? 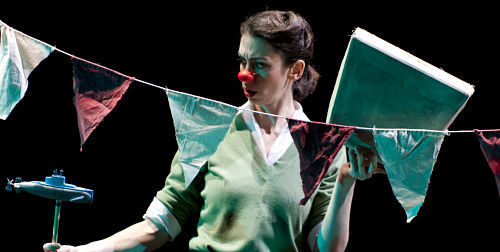 Cabaret and burlesque superclown, friend of Burlexe, Audacity Chutzpah has a very exciting project on her hands…

Waiting For Stanley is an innovative, endearing solo clown show from Finger in the Pie Theatre Company telling the story of one woman’s experience of World War II. It is performed by Leela Bunce, aka the infamous burlesque clown Audacity Chutzpah.

The show is based entirely on the real stories of wonderful women she interviewed, who lived through the war and from diaries and letters in the Imperial War Museum archives. It paints a vibrant picture of how life was for London’s women during the war: the waiting, the working, the flourishing, the struggles, the many highs and lows.

Leela says, “One woman I spoke to worked as a driver, having never worked before in her life and had a wonderful time. Another remembered being delighted by the arrival of the very dashing American soldiers!

“Others experienced heartbreak and heartache, the loss of loved ones, the pain of separation from children evacuated. It was such a fascinating, evocative time and a hugely important moment in women’s history.”

Waiting For Stanley has already received rave reviews in London and they’re really looking forward to taking it to the Edinburgh Fringe this August! However, they are still nearly £2000 off budget so they’ve launched a big fundraising campaign.

Asking people to donate just £10 (or more if you can!) to help get a clown to Edinburgh. Also we’ve launched an ‘I’m Waiting For’ photo campaign which everyone can get involved in. Download your banner from the website, write something that you’re waiting for and upload it to Facebook.

Let’s get this show on the road!

Wondering what Burlexe is waiting for? Well for the next installment of the Burlexe show of course! Duh!

Oh and for you to go sponsor a clown this summer!

Waiting For Stanley is on 2-26 August at 3.45pm at Assembly Roxy. To book tickets and for more information click here.

What would a tribute to our favourite burlesque clown look like? We asked Audacity Chutzpah.

We love to showcase UK burlesque performers and share the stories of these wonderful women who perform burlesque. Audacity Chutzpah is one such woman.

To see more, join us for the Burlexe show by booking your ticket.