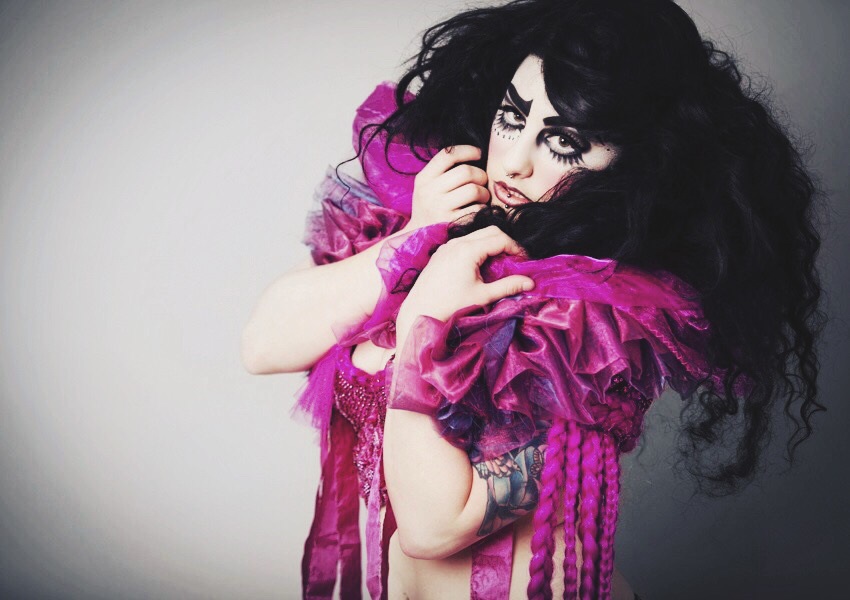 We first met British burlesque dancer, Aurora Galore back in 2011. She caught our eye supporting Catherine D’Lish with her brand of high energy Lady Gaga burlesque.

It wasn’t long before we wrangled Aurora Galore to join our cohort of coquettes for A Taste of Burlexe. By 2013 she provided us with her own Alternative Burly Icons. Consequently, we’ve been cyber stalking her ever since.

Phew! Now that secret is out, lets share what we’ve found. Aurora Galore isn’t afraid to go all-out when it comes to performing or beauty. We love that about her and we luuurve this array of burlesque makeup tutorials called Face Galore.

We’re starting off this list with Aurora Galore’s collaborations miniseries and not to be biased (but we are): the first is our favourite. Who needs delayed gratification when you’ve got this pair?

Aurora Galore is joined in this video by Boylexe family member, Reuben Kaye. The cabaret host is given the full treatment and as Aurora Galore says, “We don’t do realness.” This is aspirational son!

Their rapport and charm in this video makes us wuv them even more. Join this exquisite duo in a glass of wine and as Reuben says, “Let your freak flag fly.”

Aurora Galore continues this miniseries by teaming up with and transforming tattooist, Lain Freefall. The end result is the self-proclaimed reviled sweetheart of Drag Race, Sharon Needles.

This glorious horror makes a statement, no double-take required.

Indulge in a sprinkling of fantasy and make like a wood nymph with this fairy makeup tutorial. Unlike other burlesque makeup tutorials, this does not require full face paint. It mostly concentrates on the eyes, allowing you to work with your natural complexion.

Running up to the release of Tim Burton flick Big Eyes, Aurora Galore created this makeup tutorial. The film is based on the true story of artist Margaret Keane and her artwork. Likewise, this video is all about creating art on your eyelids.

Aurora Galore has also offered up a second miniseries around Disney villain makeup tutorials. So many things to love in one sentence.

Starting with Ursula the Sea Witch, the villainess of The Little Mermaid, her voluptuous figure and temptress ways. Not to mention her keen grasp of contract law.

Read: How to do Highlighting and Contouring Makeup.

The latest Disney villain took centre stage as the title role of Maleficent. Played by Angelina Jolie, the Maleficent makeup tutorial is now a must-have in every beauty arsenal.

This is one of the quickest burlesque makeup tutorials from Aurora Galore and is just as powerful.

The Greek guardian of the underworld and Hercules adversary, Hades, is a demented blue beast. One of the funniest Disney villains around, he is a wickedly ruthless character and dramatic look.

As you can see by now, most of these Disney villain makeup tutorials begin the same way and use similar techniques. These are great burlesque makeup and stage makeup tips that you can use again and again.

Check out our Sexy Circus Makeup Ideas and watch our quick-fire answer to: what is burlesque? (Main image from Aurora Galore)