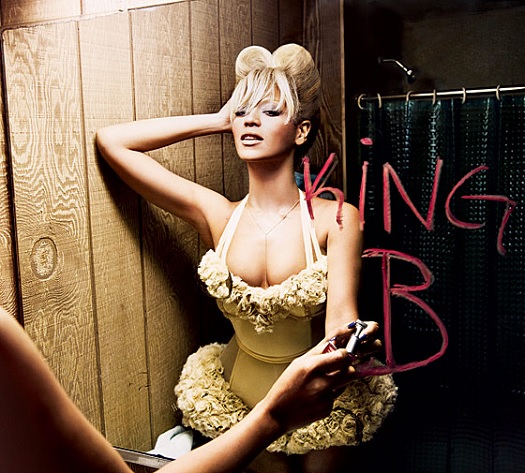 It’s often difficult to reconcile feminism with a love of modern pop music, which is especially unsettling because women are making the best pop music out there. Bitches be brilliant. But Beyoncé was undressed on the cover of GQ and Rihanna went back to a man who beat her and nobody ever wears trousers. When was the last time you saw a performance that didn’t involve THIGHS (thighs are very important, especially ones belonging to Beyoncé) and a barely-covered crotch thrusting at the camera? For 21st century women, the pursuit of Pop Super Stardom begets an eye-watering dedication to waxing.

And now we have to figure out how to feel about Mrs Carter: that is, a phenomenally talented woman, having worked constantly her entire life to be the best she can possibly be, ditching the name she made for herself and taking that of her husband. It makes me more than a little blue. It’s personally problematic as usually when I’m in a funk it’s Bey I turn to – specifically I listen to ‘Irreplaceable’ and may or may not get drunk. OK so I probably will get drunk but that’s not what this is about, alright? Jeez.

The first time I heard ‘Irreplaceable’ was in December 2006 and I was in hospital, post-operation, off my tits on Morphine. Picture this: I was a mess. I was 19 and drugged up to the hilt in a pair of pink pyjamas. Being in that bed was a monotonous blur (yeah, it’s a thing) of sympathetic looks and heads tilted to the side, night terrors and catheters and my incredibly stupid decision to bring only university work with me so I would have no other choice but to get on with it. Obviously that didn’t work because I was an idle, idiotic teenager, and also high. I was feeling pretty fragile and more than a bit pathetic.

It was late at night and I was doing some lonely listening to hospital radio when this song worked its way into my ears and I thought I’d never heard anything so wonderful. Now I know what you’re thinking: that’s the drugs talking. It’s a reasonable assumption – I had the same feeling about ‘I Luv U’ by the Ordinary Boys. That was absolutely the drugs, and possibly the mention of Phil Spector in the first verse, which in my vulnerable state was enough to induce warm fuzzy feelings. But I never committed to that track, so I don’t have it on my phone, so I don’t inwardly shriek with joy when I hear that opening guitar strum through my headphones, and I certainly don’t do an embarrassing walking dance down the street because I think I’ve got swag when to the casual observer it looks more like a sprained ankle. And as the final word, I just listened to it now “for research” and it is definitely a load of toss – let us speak no more of Preston and his kooky spelling and subpar flat-pack indie ditties. ‘Irreplaceable’, on the other hand, still fills me with joy on every listen, whether I’m on my own creeping on YouTube videos or having a diva-off with my friend Ellie in World Headquarters (the Greatest Club In The World Bar None). Because it fixed me in 2006 and six years later it is still full of magic.

(Incidentally, it was via that same hospital radio station that I discovered there are Nazis in The Sound of Music. Until that point I honestly believed, having never seen it, that it was just all singing nuns. But I digress.)

The beating heart of ‘Irreplaceable’ isn’t the fan-fucking-tastic hook (but let’s sing it anyway, now, all together: “To the left, to the left!” You pointed to the left, right? Or at least popped your hip? Very nice, dudes). No; it’s the juxtaposition between her vocal and the lyric. When she sings “I could have another you in a minute” you believe her, but there’s that hint that she doesn’t quite believe it herself yet. It’s that quiver in the high register, beautifully controlled but on the edge of hysteria, as though tears could come at any moment. There’s a vulnerability that isn’t often present in her songs, which makes it all the more powerful. Any woman can have her head spun, get hurt and lash out, or sulk, or feel as though they’ll never quite get over it. Feminism isn’t immune to heartbreak – hell, humans aren’t immune to heartbreak. It’s a bitch. You tell yourself that you’ll move on until finally you believe it’s true, and you come out the other side and are Great At Life. ‘Irreplaceable’ is a song at the heart of the storm and it is sublime. It’s “I’m not OK but I will be.” It’s the song I sing in the shower that makes me feel like I could conquer the world. It’s a mother fucking anthem.

It’s hard not to feel let down by The Mrs Carter Show. What IS that? An ironic nod to her domesticity on a world tour? Or a cheap marketing gimmick? Mrs Carter isn’t the Beyoncé I love. Mrs Carter reunites with her fellow Independent Woman at the Super Bowl and makes them sing her solo hit about wanting a wedding ring. But what about the rock YOU bought, Beyoncé? Question: why are Kelly and Michelle’s microphones so much quieter than yours? Did you fire them up through the floor to make sure we know that’s where they’ve been this whole time? Several feet beneath your skyscraper heels, trapped in a perpetual up-skirt shot like the Daily Mail of R’n’B pop fusion, living off chip scraps thrown by David Guetta? This is all a bit grimy.

Maybe what I’m trying to say is FUCK YOU BEYONCÉ FOR SHITTING ON EVERYTHING I LOVE. Except I’m not and I would never say that. I love you, Beyoncé, and I think you are amazing. I really do. But Mrs Carter? Well, she can do one. As Helen Mirren so beautifully put it, “feminism is just fucking obvious” and if the most influential figure in popular culture does something unhelpful then we should absolutely call her up on it. I’m not angry, Beyoncé. I’m just disappointed.

Lauren has previously written for us, casting her discerning eye over last year’s Hunger Games.