The recent Paul O’Grady documentary, Perspectives: Gypsy Rose Lee, created a lot of conversation on Twitter and as a result we found ourselves asking burlesque dancer Daisy Cutter, who studied the lady, to give us her interpretation of what the legend was all about…

I’d always been interested in pin-ups, strippers and playboy models so naturally came across burlesque and Gypsy Rose Lee but I started studying her when I went back to uni to do a degree as an adult learner. All my previous education was vocational and I decided I wanted to be taken seriously (how wrong I was!). My whole life was burlesque, from the pictures I took, to the costumes I created. I’m a costumier – so naturally I based most of my course work around what I knew.

My final major became about Gypsy as her life mirrored mine, a performer who made her own costumes and costumes for others to subsidise her income: ensuring the images she had in her head came to fruition.

I really admired how she was her own best advertisement. I knew the grade I would get wouldn’t be a good one. Burlesque and the way the costumes are put together were not really understood by my university, but it didn’t matter – I was being true to myself.

Gypsy Rose Lee inspired me to carry on doing what I do and be unique: to be true to myself and that I could take my little boy to workshops with me. 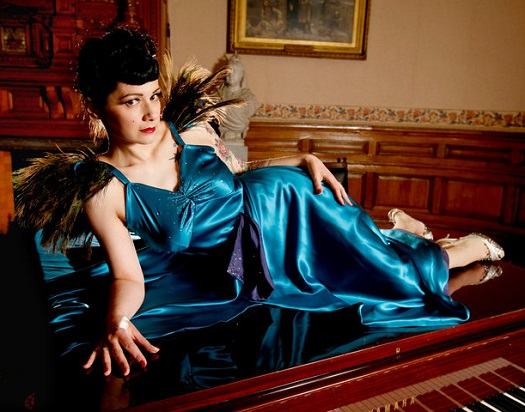 Gypsy Rose Lee’s whole life was fantastical. I don’t think there was one ultimate moment. I think she was an extremely strong willed woman who fought hard to get her own way and to get what she wanted as a performer.

She was paid extremely high wages because she made a name for herself. Although her act hardly ever changed much once it was established, her costumes did. The most amazing and extreme costumes they were too.

She had a very hard life, downtrodden by lots of people in her youth as an ugly ducking – especially when compared to her beautiful and talented sister. She was pushed hard by her unrelenting mother but blossomed into a gorgeous woman who could create her own hype, in such a way that the press thought they had done it.

She also had to bring up a child, alone, as a single mother a lot of the time, which I’m sure must have been the hardest job in the world – especially then, when it was completely frowned upon.

If Gypsy Rose Lee was alive today, I’m sure she would still be as phantasmagorical as she was in her heyday! I know a lot of the legends are now out of retirement and I would hope she would be one of them, showing the newbies how it’s really done.