The Wisdom of Lena Dunham… 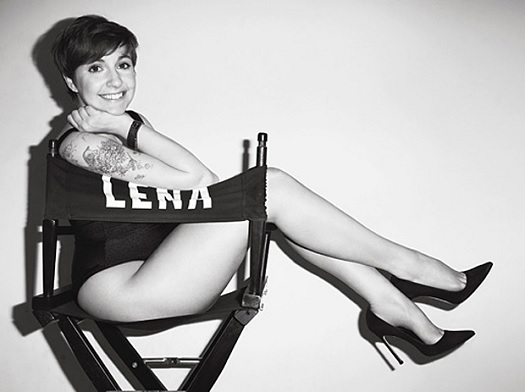 Lena Dunham quotes show her body confidence. She regularly strips off as the star of Girls series on HBO. She has since been hailed and harassed as the creator for showing “unconventional” women’s figures on TV. By “unconventional” they mean real women, who aren’t size zero with perfect breasts.

Her realistic portrayal of 20-something women in the New York based drama-comedy has won her the title of Feminist. Lena Dunham has brought the topic of women’s bodies on TV to the forefront.

As one of the new internet-savvy comedy frontwomen, she has introduced feminism to a new generation. She told Interview Magazine, “…the idea that the feminism conversation could be cool again and not just feel like some granola BS is so exciting to me.”

Talking to Marie Claire she said, “I always feel that there are two choices for women, either be totally confident about your non-size-zero body and say, ‘I love what I look like and this is who I am,’ or be the person who is obsessed with diet and exercise and keeping toned.

“What feels more realistic to me is that some days I wake up and think I love how I look. On other days I say, ‘If I had real self-control, I would be 10 pounds lighter.’ That contradiction is, to me, what being a girl actually feels like.”

Lena Dunham’s endearing honesty has won her fans and followers alike. She uses her Twitter to continue spreading her message of unapologetic body pride:

Rule: if you call me fat I block you. There just aren’t enough days on this earth. Let us do on twitter what we couldn’t do in high school!

Her hit series which just won a BAFTA TV Award is notorious for its sex scenes. From the honesty to the awkward encounters, Lena Dunham is pushing boundaries. Though she has been criticised for promoting narcissism and immorality but maybe that is an accurate representation of her generation.

Lena Dunham told Indiewire, “… for me and for a lot of people I know, sex has been this battleground on which you’re playing out a lot of identity issues beyond just getting off (or whatever the kids are saying these days).

“We were really trying to make each sex scene be a real moment of education about that character and what they want, what the two want from each other.”

The HBO show Girls is also known for its memorable Lena Dunham quotes. Some statements just define a generation like when her character Hannah said, “I have work, then a dinner thing, and then I am busy trying to become who I am.” Enjoy more with Company Magazine who shared some of their favourite Girls quotes.

Watch the trailer for the Tiny Furniture movie where Lena Dunham stars alongside fellow Girls cast members, Jemima Kirke and Alex Karpovsky. The film was also written and directed by Lena Dunham. Wowser.

Check out Zooey Deschanel We Salute You!

We look to influential and successful women as our inspiration and Lena Dunham quotes is one such source.