Miss Glory Pearl Goes Behind the Scenes of Scandalous 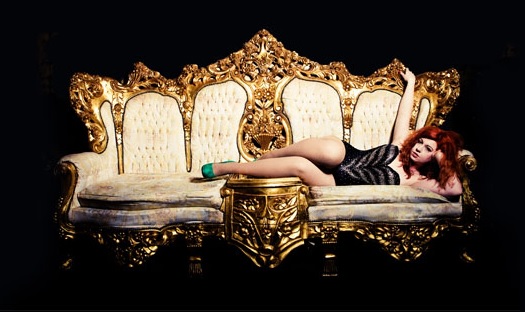 The first time I took to the stage as Miss Glory Pearl was at an Ivy Paige show and I’ve been very fortunate to continue working with her ever since. Ivy is a producer and director as well as a cabaret superstar and over the years, I have learned so much from her. She produces shows I want to watch, and she does so with integrity and imagination. She’s a savvy businesswoman, a conscientious employer and a loyal friend.

I think it was last year when we began talking about her latest show, Scandalous, as we drove home from Volupté in my little yellow car. In its first incarnation, Scandalous was a themed burlesque cabaret show, set in Ivy Paige’s eighteenth century brothel and it was great fun. But Ivy wanted to do something more with it, and she did. Better than that, she asked me to be a part of it.

Scandalous plays on the last Saturday of the month at the Leicester Square Theatre. It takes the best of cabaret and adds drama, dialogue, song and dance. It would be most accurate to call this version a musical with elements of cabaret. The premise is simple; Ivy Paige, madam of London’s most notorious brothel, must escape her contract with the rakish Marquis of Gray, played by co-writer Harper Ray, and take full ownership of her business. Ivy is supported in her quest by three loyal whores; Poppy Paige, played by Bouncy Hunter, Rose Paige, played by Ginger Blush, and Violet Paige, played by yours truly. 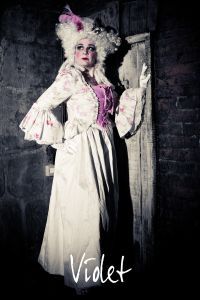 Being part of a small ensemble cast is hard but joyful work. The show runs at just under two hours and we are on stage for most of that time. With a simple set and props, the focus is on us to create the world of the brothel in eighteenth century London. Violet is Ivy’s second-in-command. She is fiercely loyal to Ivy, past her prime and utterly debauched. In other words, she’s a fabulous character to play!

After years of performing burlesque, getting back into something more sustained was both exciting and a bit daunting. As a burlesque artist, I know my work, I’m not reliant on anyone and no other performer is reliant on me. I turn up with my suitcase, get on stage, do my thing and go home.

Scandalous is a whole different ball game; lines to learn, Pete Saunders’ original songs and harmonies to learn, being directed, rehearsals to attend and someone else’s vision to realise. Plus, if you mess up, it impacts on the whole cast. Luckily, everyone in the show is both talented and diligent, rehearsals are enormous fun and we support each other through it all. Working on Scandalous has reminded me why I wanted to be an actor in the first place.

It’s not been without its challenges, however. A couple of weeks into rehearsal, my father suddenly died and in shock, I found it almost impossible to remember lines, direction and choreography. Thankfully, adrenaline, the performer’s friend, kicked in on the first night and I didn’t mess up. 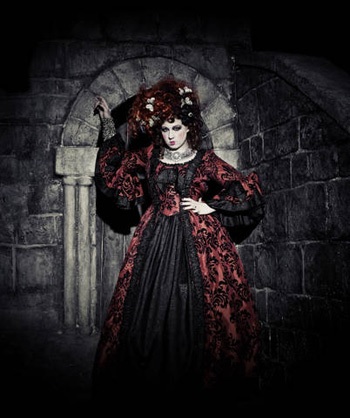 Playing a comic, almost grotesque character was also hard at times, particularly when flanked by two exceptionally beautiful women – Bouncy and Ginger. I had to put my vanity aside and remember that I was not Miss Glory Pearl – the role I’ve played on stage for the last four years – but Violet Paige; debauched prostitute, common as muck and just as dirty.

Preparing Violet’s character was really pleasurable and allowed me to revisit the territory of my Master’s degree, (in Eighteenth-Century English Literature). Violet has aspects of Moll Flanders, a bit of Fanny Hill and some of Hogarth’s Moll Hackabout. Her story is a common one for her time. She was abandoned on the streets as a child and turned to prostitution at an early age before being ‘rescued’ by a bawd and put to work in a brothel. She is comic but she has depth. She loves Ivy and she hates the Marquis of Gray, well, all men to be honest.

The two leads, Ivy and the Marquis, are compelling characters and the show has been very well received. It’s a work in progress, growing with each performance and it feels both creative and satisfying to work on. I love that it demands a broad range of skills from me; flexing those creative muscles in a way they never can be as a solo performer. And I love the camaraderie of it; we all muck in and we make magic. Long may it continue!

The next show is on 30th December at the Leicester Square Theatre and get more details on Ivy Paige.

We love to showcase UK burlesque performers and share the stories of these wonderful women who perform burlesque. Miss Glory Pearl and the Scandalous cast are some such women.

(Image from Play to See)