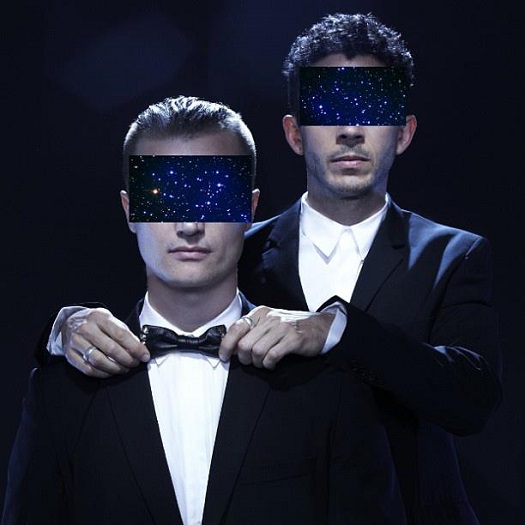 Earlier this year the burlesque performer, Dita Von Teese, collaborated with Monarchy for her first step into the music biz. Burlexe talked to the band and got all the lovely details.

We shared the video to ‘Disintegration’ when it was released in January and since then it has gained many fans, one even got a tattoo of the lyrics. Let’s find out how this all came together…

Introduce yourself: This is Andrew, one half of Monarchy. We’re a London based electro/indie/pop/whatever band. Our last single features Dita Von Teese in her first musical collaboration.

How did the collaboration come about? Dita saw us perform at Coachella in 2011 and started tweeting about us. We started e-mailing and she invited me to DJ at one of her events. After that she invited me to spend Christmas with her in Paris with some of her crazy friends, so we had five great days in Paris and became friends. It was in Paris that we decided she should appear on our next single. So we wrote her a song, and returned to Paris to record her. It was very easy and great to work with her. We shot the video in Tel Aviv which was really great to be there with her.

How familiar were you with each other’s work before you met? I knew about Dita but obviously not as well as I know her now, I knew she had a show and her history with Marylin Manson. She knew a lot about our music. She was singing our songs to us and asking questions on the meaning of specific lines. It was very flattering.

Tell us a Dita secret. It would be improper of me to reveal any secrets of a friend.

What makes Dita a star? Her mystique and elegance, and she is really great to work with, and treats everyone around her with a lot of respect, and her fans as well. She deserves to be a star. As well as that she’s highly creative and intelligent, so she’s taken something to a level that it hasn’t been at since the 50’s really. Quite an achievement.

What have you learnt about burlesque through the collaboration? Sexiness is more about what you leave on than what you take off.

What happens next? We’re working on our new album, which features the single and also deciding on how to shoot the next video. It’s going to be with the same video director, so we’re hoping for great things.

Watch them perform live at Coachella 2011 below:

Listen to the Burlexe Playlist for our music inspirations.