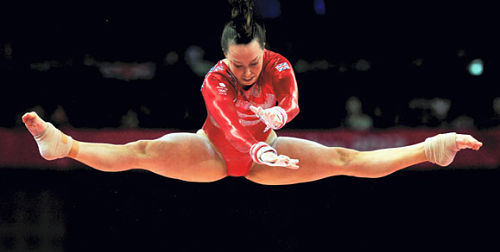 Miss Beth Tweddle gymnastics are part of Team Britain in the seminal year of the London Olympics 2012. She’s considered to be the best female British gymnast of all time and one of our Olympic heroes.

Oh Beth Tweddle. You amazing, beacon of British medal hope and joy. Personally, I’ve been a little obsessed with ‘our Beth’ since watching her train at the National Gymnastics Centre five years ago… how couldn’t you be?

Britain’s first ever female World Champion gymnast in 2006, Beth has a ton of pressure and thousands of adoring fans. She was also the only gymnast ever to be in the running for BBC’s ‘Sports Personality of The Year’ award.

Dubbed the ‘Mother Hen’ of the British Gymnastics team, Beth is an expert on bars, troubling the judges with two versions of a routine that could win her gold on Monday.

We look to influential and successful women as our inspiration and Beth Tweddle gymnastics is one such source.

(Photo via The Independent)