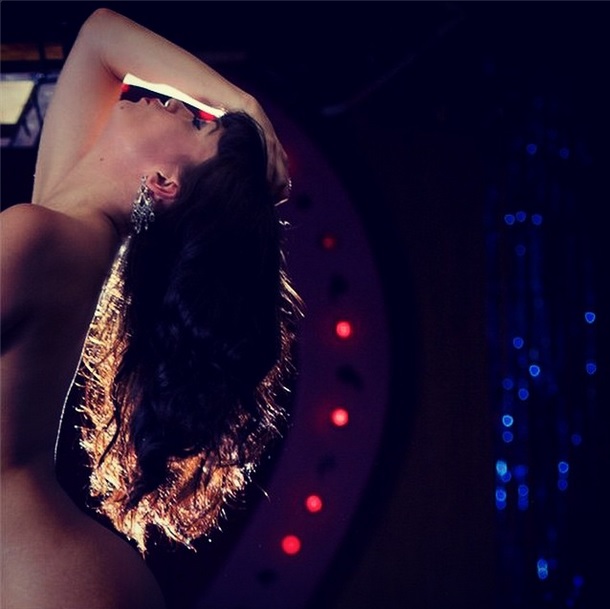 Throughout 2014 we’ve been sharing monthly instalments of burlesque news stories and of course celeb stalking Dita Von Teese. Now we have your one-stop-shop for all the inspiring and titillating news from this year.

In 2014 there has been a burlesque boom and it can be tough to keep up with all the burlesque dancers, burlesque shows and burlesque festivals. Luckily, we’re here to give you all the must-know headlines. Here’s the top burlesque news stories 2014 from every month plus what we’ve been up to. 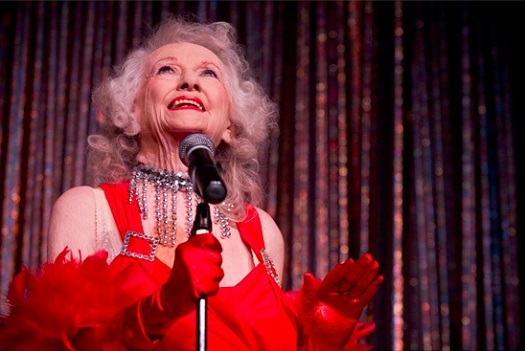 The burlesque dancing community was mobilised into fundraising burlesque shows and making donations. Then January 2014 saw their goal reached to give Dixie Evans the send off she deserved. Read more here.

In January one of our favourite fashion and burlesque collaborations were back in the headlines. Dita Von Teese closed Jean Paul Gaultier’s couture show in Paris to celebrate his burlesque inspired range. Read more here.

We began the year by asking our readers: what does burlesque mean to you? We were truly moved and inspired by the responses we received. You can read them all here. 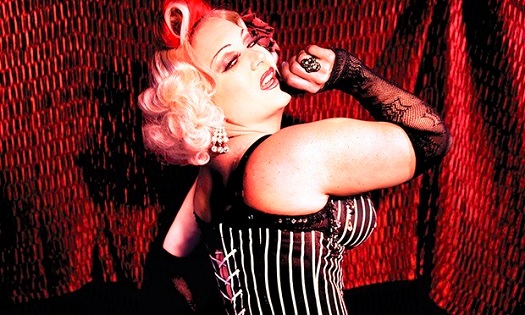 In February 2014 burlesque documentary Exposed: Beyond Burlesque was finally released and you can get yours on Amazon. Read The Art Desk‘s review to see what you’ve been missing.

Every year lovers everywhere celebrate their union on Valentine’s Day. In 2014 this was the perfect opportunity for Dita Von Teese to share her guide to seduction. Get the deets on Gilt.

Meanwhile, we were sharing our wonderment at the wonderful Coco Lectric and Medianoche. These hard-working and award-winning burly beauties kill it with their curvtastic stage antics. More of this in 2015 please. 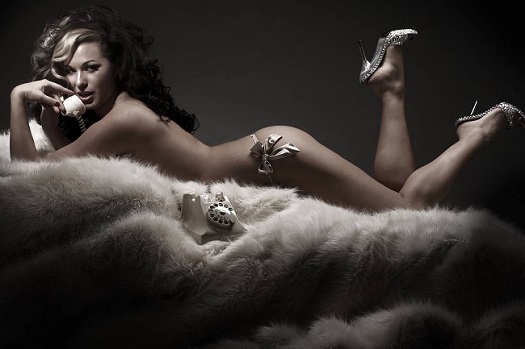 (Image from The Evening Standard)

In March burlesque dancing made headlines due to the Burlesque Boom in the United States. Some were even calling it a Booty Boom. You’re welcome world.

Famed LA burlesque dancer, Dita Von Teese announced her plan for semi-retirement in 2015. We’ve also heard she plans to come to the UK in the coming year. Get the scoop here.

March saw us celebrating International Women’s Day 2014 with our list of inspiring women making waves. We didn’t just have our serious face on though, we also shared five ways to glitter your life. 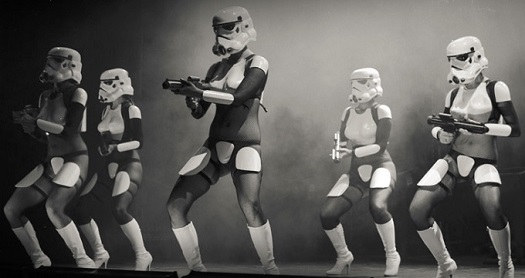 (Image from The Vanguard)

This year has also been bursting with creative and spectacular nerdlesque. It even saw the welcome return of the much beloved Star Wars burlesque, according to Western Advocate. It’s never too late to get your fangirling on.

Read: The Best Dressed in Nerdlesque.

Dita Von Teese again linked up with eyewear maker DITA Inc., according to WWD. The Dita Von Teese sunglasses are imbued with vintage femininity and were just in time for summer.

We were busy busy busy making new friends in the burlesque community and we fell in love with their own unique takes. First there was Charlotte White and her Burlesque Baking book.

Then there was the arrival of the new Burlesque Map. Cartology never looked so good. Finally, we hooked up with The Voice contestant and burlesque singer, Kiki Deville. Whadda month! 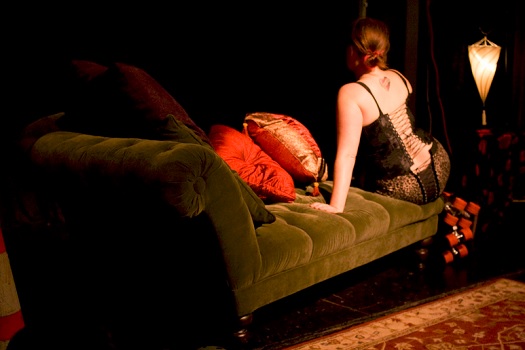 In May the Seattle burlesque community showed their support for one another with self-defence classes. The workshops were set up by the Professor of Nerdlesque, Jo Jo Stiletto, amongst others. Get all the info on Burlesque Seattle. You go girls!

Dita Von Teese joined the glitterati on the red carpet. Firstly, there was her yearly pilgrimage to the Cannes Film Festival. Get the goss from Burlesque Bible but if you want to see her Met Gala ensemble look no further than Perez Hilton.

In May we branched out from burlesque dancing with our fave celeb showgirl costumes. We were also treated to London Wonderground tickets after we fell in love with circus performer Heather Holliday. Flutters eyelashes.

See our full Women in News Roundup May 2014. 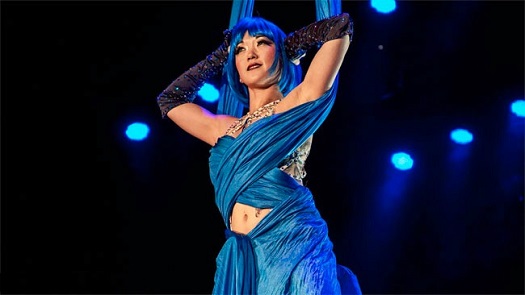 Australian-born London burlesque dancer, Bonnie Fox also won an astounding two crowns for her debut at the event. This year, however, saw the first ever winner of the Sparkly Devil Burlesque Scholarship, Goldie Candela. Congrats to all!

Dita Von Teese has been seen in several music videos including 30 Seconds to Mars and Monarchy. Now she has starred in George Michael’s music video. Watch it here and read more on Music News.

In June we found a new friend in Fly Moon burlesque singer Adra Boo. We then answered the age-old question: how do nipple pasties stay on? What more do you need? 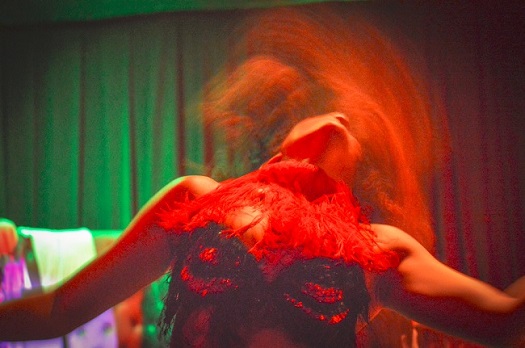 Burlesque powers can also be used for good. Burlexe sister from another Mister, Sukki Singapora has been using her’s wisely. She has been fighting against forced marriage in the UK, according to PR.

Dita Von Teese teamed up with Destination Maternity to create a new lingerie line for mothers. The Von Follies maternity collection includes nursing bras and postpartum panties, according to the Inquisitr. Plus the promos were gooorgeous.

In July we could not stop talking about the new cabaret and burlesque movie, Cabaret Soup. We also went wild for these cabaret costume ideas inspired by the film starring Liza Minnelli. 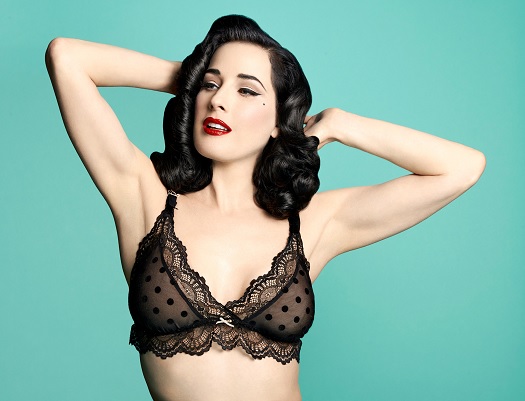 The growth in burlesque dancing has certainly been in the spotlight this year. The Independent discussed how burlesque and its public image went from seedy to sensational.

Whilst The Daily Beast went inside London’s underground burlesque scene and found us and our trashy little brother, Boylexe. We certainly recommend that you do the same. Wink.

Following the release of the Dita Von Teese lingerie line maternity range there were some mixed feelings. The Daily Beast has given reviews both for and against. Which side, you decide.

In August we created an all-new interactive infographic about neo-burlesque. You can follow key events in burlesque dancing since its revival in the 1990s. Plus, we highly recommend you touch it.

Each pic will take you to an article related to that year’s highlight. You can now get to grips with the evolving burlesque movement in one place. 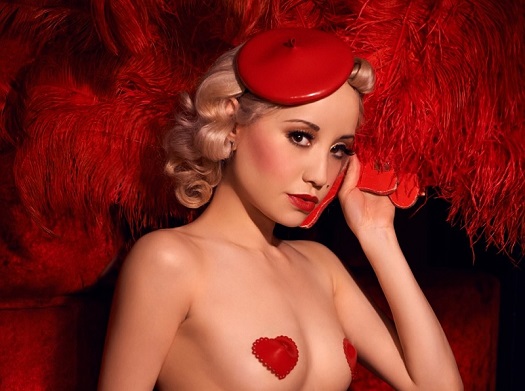 Whereas, London burlesque dancer, Chrys Columbine (above) was heading further afield to Beirut. See the Daily Star for more on her work spreading the good word about burlesque.

In September we finally got the Dita Von Teese news we’ve been waiting for. She told Racked, “We’ve been doing this show, as is, for quite some time now, and I want it to evolve into something else. And I’m trying to bring Strip, Strip Hooray to Europe.” When ever you’re ready, we will be there with pasties on!

At the same time, we were sharing our favourite burlesque photography from Kaylin Idora. We were busy celebrating the evolution of the sexy bunny. Then we indulged our sweet tooth with The Cadbury Queen, Violet Blaze. 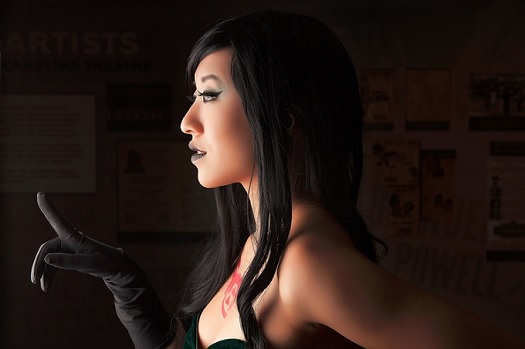 In September Facebook suffered a backlash after forcing users to use their real names. By October protests from the burlesque and drag queen communities forced Facebook to rescind and apologise. Read more on this global news story in The Guardian.

Dita once again spoke about how burlesque offers a different form of sensuality from the mainstream entertainment industry. She also called it absolutely feminist. Read the full story on The Huffington Post.

In October our website and online lingerie boutique got a beautiful makeover which we may have been bragging about. We were then teased with pics of the All Nude Cabaret Charity Calendar 2015.

We were also given the scoop on upcoming burlesque show, The Naked Stand Up. Long-time friend of Burlexe, Miss Glory Pearl shared all the deets and you bet we were there opening night.

Sadly it wasn’t all tiaras and ticker-tape.  The infamous London venue, Madame Jojo’s was set to close following an incident outside their establishment. Claims have surfaced that this is actually thinly veiled gentrification, according to The Guardian.

Across the Atlantic, Dita Von Teese enlisted the cast of her burlesque show to promote her lingerie line. The sexy ensemble includes fellow fabulous burlesque dancers Perle Noire and Dirty Martini. Find out more about the in-store appearance at Bloomingdale’s on SFGate.

In November we were allll about the roundups as we shared the outlandish Aurora Galore makeup tutorials. We then offered our very first Instagram roundups. You can now see all our favourite burlesque fashion and burlesque beauty posted on the social media app. 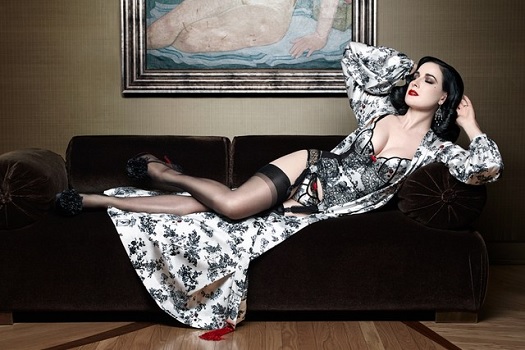 The closure of London burlesque club, Madame Jojo’s has ignited a battle for London’s lively Soho, according to Newser. It’s set to continue into the New Year as protesters fight against gentrification.

Raven-haired entrepreneur, Dita Von Teese has now teamed up with Christian Louboutin to create a lingerie capsule collection. The seven-piece range called XXXtian is set to be limited edition and exclusive to Glamuse.com. See WWD for more.

We’ve been getting in the festive spirit by sharing our favourite Christmas pinup pics (NSFW) and music videos. We can’t wait to see inside our stockings and what 2015 will hold. Here’s to more more more burlesque, glitter and glamour.

Our full December news roundup will be coming soon…