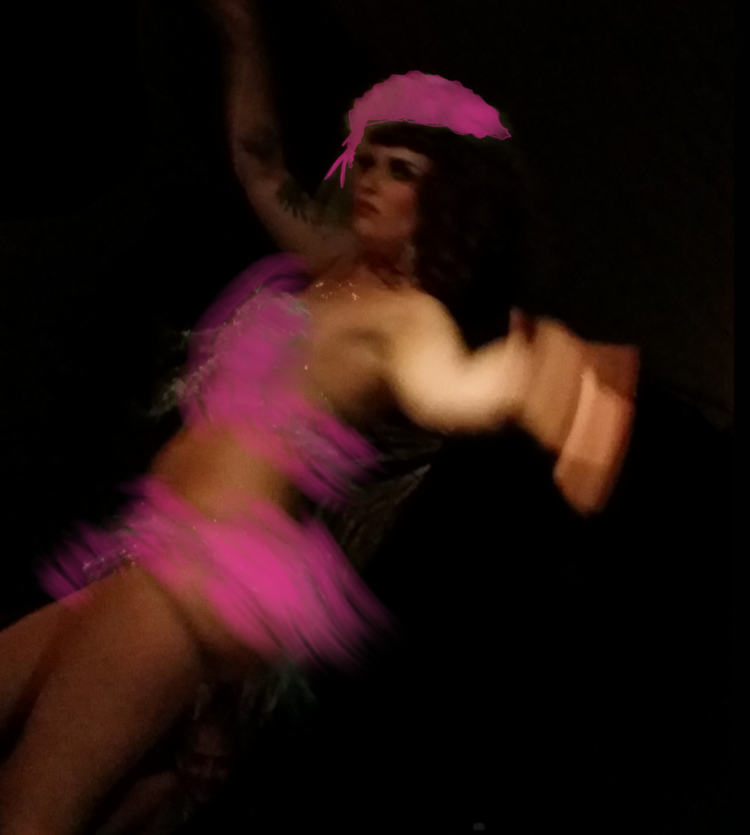 Get to know the Miss Exotic World winners from their start in 1991 to the current day. Here’s the 25 years of winners and why they won the crown.

The idea behind it came from Jennie Lee who wanted to create a way to support retired burlesque dancers after being diagnosed with cancer. She began by making the museum with her husband from her own collection.

She then enlisted her friend Dixie Evans who took over after her death and formed The Exotic World Burlesque Museum. Then donated items started coming in to preserve burlesque history.

In 1991 the Miss Exotic World Pageant was launched and Dixie Evans gained attention with the press release. She name-checked the biggest names in the biz on their guest-list. These people had technically been invited but the little white lie worked wonders.

The Burlesque Hall of Fame has now moved to Las Vegas with a museum of exhibits and annual weekend held at the start of June. It comprises of two days: the Tournament of Tease and the Titans of Tease. The latter celebrates and recognises burlesque legends.

The first sees the Miss Exotic World competition with a growing list of other titles. These include King of Boylesque, Best Début, Most Classic, Dazzling, Innovative and Comedic as well as Small and Large Group.

Yet, Miss Exotic World remains the most highly coveted title and has come to be known as the Queen of Burlesque. Here’s every winner since it began 25 years ago.

June 2016: News just in, Poison Ivory has just been crowned Queen of Burlesque. We’ll be updating the page with more information soon.

Miss Exotic World 2015 winner Trixie Little finally took home the title on her fifth go. Previously, she came second runner-up to Angie Pontani in 2008 and to Imogen Kelly in 2012 though she also competed in 2008 with her Flea Circus and 2009 with her Viking act.

Hailing from Maryland, Baltimore, Trixie Little comes from a circus background. She’s also known for winning Best Duo in 2006 as part of Trixie Little and the Evil Hate Monkey.

The Denver, Colarado native is also known as the “The Mile High Flying Tease” and for good reason. It was her aerialist silk dance that saw her come out on top.

Watch her performing at the Colorado Burlesque Festival 2013.

She has also briefly featured in the burlesque duo, The Buxotics, with friend of Burlexe, Luna Rosa. Watch her bump ‘n’ grind burlesque dancing at Burlesque Hall of Fame 2013.

Australian burlesque dancer, Imogen Kelly scored the top spot with Miss Exotic World 2012. She has several degrees, speaks an array of languages and has performed across the world. This is one talented bird.

Imogen works those pink-tastic burlesque costumes which culminated in this amazing Flamingo outfit for the winning act. Watch her performing at the Burlesque Hall of Fame 2012.

Headmistress of The Academy of Burlesque in Seattle and creator of BurlyCon, Miss Indigo Blue won Miss Exotic World 2011. She is evidently one of the most lovable and hard-working women on the circuit.

This triumphant and comic burlesque performer made hilarious videos to mark her reign. Watch her address her subjects in this video of her final edict.

Miss Exotic World 2010, Roxi D’Lite, first appeared at BHoF in 2009 winning first runner-up before returning to conquer the competition. Her original attendance made her the first Canadian burlesque dancer invited to take part.

Watch one of her most salacious burlesque routines as Madame X.

Miss Exotic World 2009, Kalani Kokonuts began her career as an under-age topless stripper when burlesque was on its last legs. Since then it has seen a resurgence and her star has risen along with it.

Watch her performing an authentic hula dance at Burlesque Hall of Fame Weekender 2011.

Burlesque queen isn’t the only role of Miss Exotic World 2007, Immodesty Blaize. The British showgirl is also a writer, muse, model and documentary-maker. Much love!

Her road to the crown began with winning Best Début at the Burlesque Hall of Fame Weekend 2007. Then she returned a year later to take home the top title and Most Classic. What a woman.

Watch her burlesque dancing on a six foot telephone. Call us maybe?

Julie Atlas Muz has been much more than the resident mermaid in Europe’s largest water tank. Dontchaknow! She has also been crowned Miss Exotic World 2006.

Ten years on and she’s known for performing with husband Matt Fraser in their Beauty and the Beast show. A brilliant pair and exceptional woman.

Watch this burlesque performer do what she does best at BHoF 2011.

The first burlesque queen crowned at their new Las Vegas location was Michaelle L’amour, Miss Exotic World 2005. This endless advocate of the genre was the perfect woman to make history.

We’ve all been mesmerised by the infamous Michelle L’amour Butthoven (and if you haven’t, do so now and thank us later). She’s also known for her wonderful burlesque classes.

Miss Dirty Martini continues to be a burlesque inspiration ever since winning Miss Exotic World 2004. She was the last to be crowned in the original desert location and fuses the past and present perfectly.

The burlesque community’s love for Dirty Martini has been shown time and time again. She topped 21st Century Burlesque‘s Top 50 Burlesque Dancers list for four years in a row.

She can now be seen performing internationally and as part of the Dita Von Teese tour. This is not a woman to miss. Watch her Bombshell act at Toronto Burlesque Festival.

Hailing from Tokyo, Erochica Bamboo began her career as a teenager in 1984 performing at nightclubs and cabaret shows in Japan. Then, her long career led her to winning Miss Exotic World 2003.

She has since launched Tokyo Tease after returning to her native land in 2008. Now she is based in Berlin and continues to perform across Europe.

Watch Erochica Bamboo do her thing in this burlesque dancing video.

In 1994 Miss Exotic World 2002, Kitten de Ville, was a star of The Velvet Hammer burlesque troupe. Their sold-out extravaganzas were key to the return of the LA burlesque scene.

Cherry Malone took home the Miss Exotic World 2001 title and was known for her comedic stage kitten personae. She has since gone back to school with a hiatus from the industry, according to her Fan Page.

Watch her perform in Random Acts of Senseless Comedy and Medley.

Pinup model and burlesque dancer, Christy Campbell, was the tenth burlesque queen with her Miss Exotic World 2000 win. The former Vegas gal has left her name in burlesque history and has since moved on with few records available.

Kina Cochina began drumming at a young age and combined her passion for music with her dance training. She became a go-go dancer accompanying bands.

She too was involved in the early days of The Velvet Hammer before writer and fellow rock ‘n’ roller Pleasant Gehman took an interest in her work. As a mentor, Pleasant taught Kina how to be a professional belly dancer.

Later this experience attracted a second teacher in Dixie Evans herself, according to Patterns and Tones. These instructors led Kina Chochina to compete and win Miss Exotic World 1999.

Her career as a showgirl and rock chick continue on stage and in bands.

Stephanie Blake is the first and only Miss Exotic World winner to take home the crown in consecutive years. This flame-haired professional peeler from Kansas City, Missouri gained her second title in 1998.

She’s also known by the stage name Cimmaron and under both monikers continues to burlesque dance today. Watch her recent appearance at the New Orleans Burlesque Festival.

The Miss Exotic World competition in 1997 saw Stephanie Blake win the crown for the first time. Luckily, Burlesque Hall of Fame have since caught up with her to nab some of her wise words.

She said, “For me, being Miss Exotic World two years in a row has meant lots of attention and a lot of requests for me to perform. I love the museum in Vegas and all the people involved with the show.

“I would tell the fabulous talented girls aspiring to become a burlesque queen to never worry about the competition. Just get on that stage and show ‘em how it’s done!”

In 1996 Rio Savant was crowned the Miss Exotic World winner at their desert collection. By this time, neo-burlesque was starting to take off.

Her showgirl style took her to the top but unfortunately there’s not much documentation of this lovely lady. She was, however, paid tribute to in the BHoF Sequins in the Sand exhibition.

Pillow, otherwise known as Miss Exotic World 1995, began her burlesque dancing career in 1976. She was one of the few women keeping the art form alive at that time.

She attended the first competition in 1991 and became one of its biggest supporters. She first took part in 1993 but didn’t get the title until two years later.

Pillow is known for her creativity and imaginative costuming as well as her form of femininity as a body-builder. See her working it at Glamourcon with Tempest Storm and Dixie Evans.

The original two-time Miss Exotic World winner is none other than, Catherine D’Lish. Burlesque queen and highly coveted costumier.

She continues to imbue the industry with innovation as an icon and pioneer. Watch her at New Orleans Burlesque Festival with the world’s biggest fans.

The third Miss Exotic World winner is AleXXX Marvel but little is available about her burlesque dancing career.

In 1992 Catherine D’Lish won Miss Exotic World for the first time. This prestigious accolade had some unexpected side-effects which are likely to go down in history.

Her now best-friend, Dita Von Teese, actually pulled out of the 1994 event when she heard Catherine D’Lish was joining the ranks. Thus is the formidable power of Catherine D’Lish.

Dita Von Teese said, “In 1994, I finally had worked up the courage to compete in Miss Exotic World for the first time.”

She added, “But when I found out Catherine D’Lish was competing, I chickened out,” according to the Las Vegas Sun.

Toni Alessandrini hails from Silver Lakes, California and was the first ever Miss Exotic World winner in 1991. She also remained a key player for at least ten years.

At the time of her win she was 41 and her previous crowns included Miss World Burlesque in 1980. She was first inspired by Natalie Wood in the film Gypsy and clearly took it all the way.

Get a glimpse of Toni Alessandrini in the pandemonium before the Miss Exotic World 2001 competition. See if you can also spot Dixie Evans, Cherry Malone and World Famous *BOB*.

Watch our quick-fire burlesque history lesson as we answer: what is burlesque? Main image of Kitten from Kitten and Lou by Burlexe creator, Howard Wilmot.