Serena Doherty
February 6, 2013
What is Burlesque 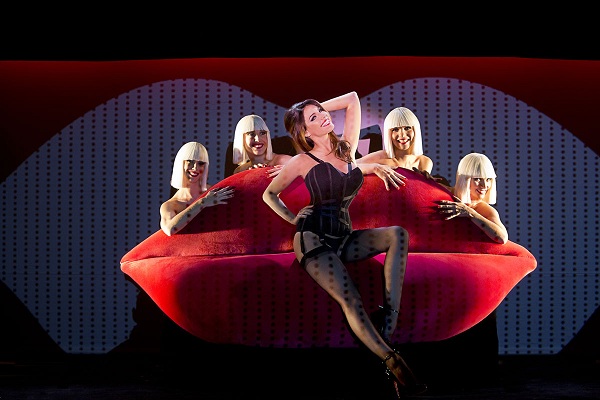 Last November Kelly Brook became the latest celebrity to join the infamous Parisian burlesque troupe Crazy Horse for their residency in London. The model and presenter performed for a week with the group in their Forever Crazy show.

In the run up to their collaboration Kelly Brook teased her fans with costume pictures while her sultry performance on the red lips couch received rave reviews. To hear how she found herself in a blonde wig and red corset check out this video:

British supermodel, Kate Moss, famously pole danced in 2003 for The White Stripes ‘I Just Don’t Know What To Do With Myself’ video directed by Sofia Coppola. The video put the pole exercise craze into full throttle as she spun around in underwear and a pair of high heels.

Robin Antin created The Pussycat Dolls, who were originally a burlesque troupe, in LA in 1995. Their early days took inspiration from music of the 50s and 60s.

The original (ever-morphing) line-up included the choreographer Robin Antin, Carmen Electra and Christina Applegate, who can be seen in this video performing on David Letterman:

Carmen Electra has gone onto collaborate with other former members like Forty Deuce as part of Les Femmes Cheries but she decided not to join the reincarnation of The Pussycat Dolls. Instead Electra has made workout DVDs like Fit to Strip and Aerobic Striptease to share her talents with the rest of us. Get a taster of how to burlesque workout, Carmen Electra style:

Meanwhile, Christina Applegate has continued acting but hasn’t let her dance background go to waste, as you can see in this spoof video for prenatal pole dancing:

Christina Aguilera also became a member of the show, though they had many guest vocalists. Later, the pop starlet went on to act and sing in the film Burlesque directed by Antin’s brother. She also showed off her sassier side in the ‘Lady Marmalade’ hit in 2001 as a single from the soundtrack of Moulin Rouge! alongside Pink, Mya and Lil Kim.

And in 2010 too, Kelly Osbourne joined the group for a second time following her success in Dancing With The Stars. Also on the bill was the troupes’ original member Carmen Electra as they returned to their old haunt The Viper Room. You can see a video interview with the original members and Kelly Osbourne below:

Ladies, we salute you and look forward to more celeb filled burlesque in the future…

We’re sure there are many more celebrities who have given us a great Burlesque performance so feel free to tell us who on our Twitter.

Enjoy 10 Great Burlesque Movie Moments for more burlesque performances and our answer to: what is burlesque?