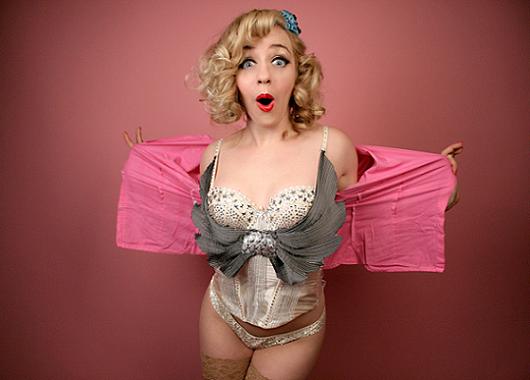 Peggy de Lune is known for her ‘Ditz, Glitz ‘n’ Titz’. How could you not love her?

Her blonde bombshell persona evokes the old Hollywood glamour of screen sirens like pin-up Betty Grable. Trained at both the Royal Ballet School and Drama Centre London, there’s a lot more here than a pretty face.

Peggy de Lune is known as a solo burlesque dancer but she has also performed alongside Miss Polly Rae in The Hurly Burly Show. As a host and featured soloist she has joined the show in the West End and in Johannesburg, South Africa.

Peggy de Lune is also an award-winning burlesque performer. Among her titles she has been awarded Best Solo at Texas Burlesque Festival, Best Comedic Act at Milan Burlesque Awards and crowned Best British Newcomer at the World Burlesque Games 2012. Though, yes, she is actually American.

This year saw Peggy de Lune grace the coveted spotlight during the Burlesque Hall of Fame Weekend in Las Vegas. She has also spent the past twelve months touring burlesque festivals.

Watch Peggy de Lune burlesque dancing at the PA Burlesque Festival 2013 with the routine that got her second runner-up below. Trust us, it’s nothing without the sound.