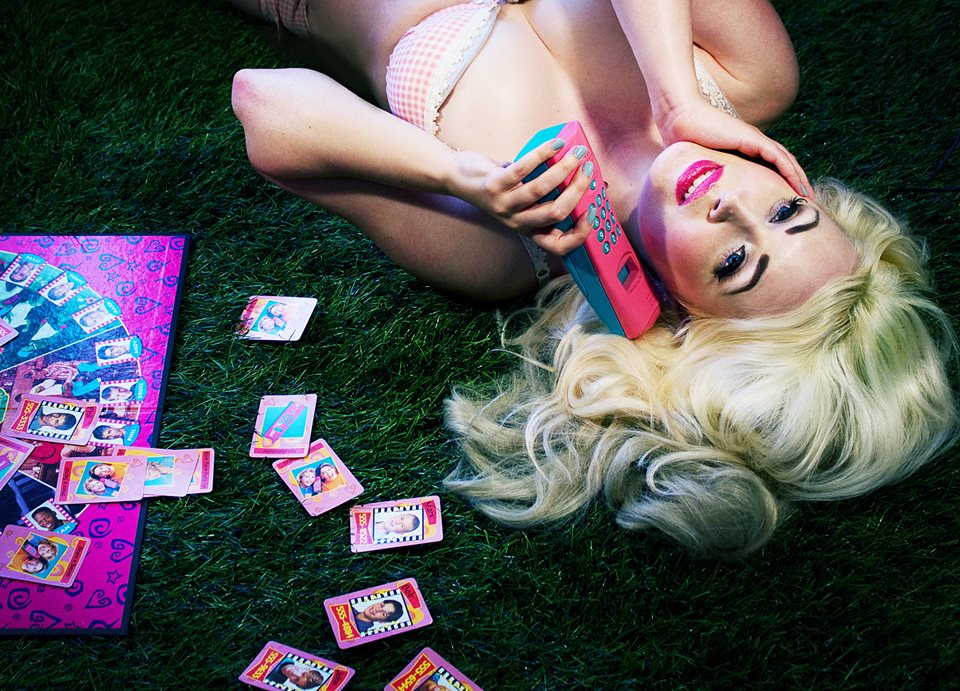 Trixie Malicious and Mat Fraser host and curate London’s most infamous NYC-style burlesque and cabaret night at Camden’s Lockside Bar & Grill. Here’s the lowdown from the lady herself…

What are the highlights from Trixie Malicious’ CV? I’ve been dancing and performing internationally since about 2004. I started a year before that in Vancouver, so have been performing for a decade in cabaret.

I’ve been a headliner and performed at many international burlesque festivals and big shows all over Europe, Canada and the US. These include in Oslo, Rome, Rotterdam, Sardinia, Milan, Lisbon, New York, San Francisco, Vancouver, Barcelona, Madrid, Turku (Finland), Palermo, and all over the UK of course.

I was a member of BurlyQ, London’s first burlesque troupe. There was an emphasis on queer cabaret along with Fancy Chance, Fred Bear, Dusty Limits, Anna Kronist, Blanche Dubois and Josh Knowles. I was also one of the original performers on the books of the Whoopee Agency and a regular house performer at The Bethnal Green Working Men’s Club.

I’ve done interactive comedy installations and gigs in partnership with Josh Knowles. This includes a very memorable one at the ICA where we performed crystal healing and rode a dolphin as a new age tantric leotard-clad duo called Chakralax. We also won a spoof Eurovision song contest as Das Booty, a Bavarian rap techno dance duo with our ridiculous joke song receiving over 24,000 hits on youtube.

I’ve had a long career as a 60s go go dancer and have a passion for garage rock. I have performed at many international 60s and garage rock festivals along with shows all over Europe, UK and US.

I’ve toured with and performed for some of my very favourite bands! I was the main go go dancer for six years at London’s infamous 60s clubnight Grind-A-Go-Go as well as helped with the band bookings.

I’ve run and produced my own parties and events, mainly in the 60s garage rock vein, for Shoreditch House and Soho House. I DJ often in London and have been hired for international DJ sets in New York and Miami.

In 2012, I started my own band, a little girls-in-the-garage outfit, called The VanDorens. NOW I’m co-producing Sleaze along with Mat Fraser!

How did you come to the attention of Burlexe? I was a guest performer in one of the Burlexe shows Howard wrote! I believe last year? Or the year before? I’m afraid I am rapidly losing my concept of time!

How did Sleaze start? Both Mat (Fraser) and I had become quite disillusioned with some aspects of the Burlesque world. When we started in Cabaret it had seemed like a place for the free expression of beautiful freaks and misfits, very DIY and almost quite punk, and we missed that.

We felt like many corporate dinner clubs and nightclubs were only interested in hiring beautiful size-8 models new to the world and that some of the performances we were seeing were watered down or there was a uniformity to things emerging. Lots of shows were slick with no place for good ole cardboard and glitter props and such. Burlesque has become mainstream and we weren’t sure we liked how normal it was becoming as a result, it felt like a lot of the edge and the excitement was fading or actually had dissipated.

Not to imply that excellent performers and acts weren’t emerging because they most definitely were as well of course, but just that the scene in general had developed some new disheartening elements.

We decided with Sleaze that we wanted to bring back the low-budget, anything goes, chaotic, expressive fun that we had missed! We wanted to hire all the acts that we loved so much and thought were genius even if some snotty club had thought they were too fat, or weird, or unmarketable or whatever!

But basically we just wanted to hire the acts and performers that entertained us no matter what. We wanted to build a little loving family of fun and supportive freaks and people in it for fun not business.

The Lockside Lounge wanted a regular show and we had a meeting with them and said we would do it if we could do whatever we wanted and let performers get as strange or silly as they desired and they delightfully agreed!

Is there a ‘curation’ agenda? Yes , we curate our shows very carefully to make sure we have a real mix of all types of performers: straight, gay, drag, scary, sweet, silly, political. There’s also the common thread that they all must be highly entertaining and nice people.

We also have a format of six acts per show and three sort of game show sessions, where we play a ridiculous game or do a quiz or have a dance-off for example. Just something interactive because we want our audience to have lots of fun and feel they can be involved and participate if they wish to rather than just passively watching.

We also have our in-house drag baby, the wonderful Miss Cairo, go go dancing and writhing about and generally amping people up during intermission and throughout the night.

We like to have side things going on too. We have a giant over-the-top Grand Prize Raffle Basket that’s raffled off by our Thai Bride character Lilly Snatchdragon and a GlamShotz glamour photobooth by Birdman Foxglove. We want the night to feel not just like a show but kind of chaotic-like circus or like a market of fun.

Please namedrop for us – who has passed through the hallowed gates of Sleaze? Because Mat and I perform in New York often, particularly Mat, we get a lot of New York performers coming over. It’s perfect since we often describe Sleaze as a NYC style show.

We’ve had from NYC: Julie Atlas Muz, Legs Malone, Johnny Porkpie, Essence Revealed, Pinkie Special, Go-Go Harder, Minnie Tonka, Scotty The Blue Bunny, Evil Hate Monkey, Deity Delgado and this month we have James Habacker (aka Mel Frye). He is the host and producer of one of our favourite shows ever in NYC, The Slipper Room. And also Tigger! Tigger is even doing an exclusive, Sleaze is his only London show!

I really hope I am not forgetting anyone. I’m sure I am and I hope they will not be offended and realise it has nothing to do with their memorability and everything to do with my high school acid trips.

What have been the finest moments? I don’t know that I can choose. I’m not just being cheez-EEE, but there are honestly many magical moments every single show that make my heart soar with delight.

Mainly because we’ve managed to round up such a wonderful, fun, supportive crowd who yell and cheer along and come to see the mayhem we’ve put together for them with such accepting souls!

I guess some moments that are among my favourites would be the times when the whole audience has stood up and we’ve had impromptu dance parties. That has happened quite a few times, completely spontaneously.

Also, the first time we ever played the game I invented based (oh so loosely) on Silence of the Lambs called, ‘It Puts the Lotion in the Basket’. Players must squeeze a bottle of lotion using only their thigh muscles into the awaiting basket that is poised between Miss Cairo’s spread legs some distance away.

I guess my understanding of physics needs some work because I thought the lotion would fall just short of the basket and had brought a measuring tape to guage who got the furthest towards it. Yet, the whole audience and I gasped when a thick spray of lotion cabled across the stage like a limbo stick and coated Cairo’s entire face! Cairo was a great sport about it and now it has easily become our most popular game!

I think this magic moment is representative of us. We have a very informal feel and things often even seem a tiny bit out of control and thus our good times spring up unexpectedly surprising even us.

Is there any times you’ve pushed the envelope too far? Ummmm… No. I don’t think so. We’ve had so many shows where audience members have come up to us and said, “I can’t believe you got away with that!” But they seem to love that no-one knows entirely what will happen next.

I love it when an audience watches an act peeking from behind their palm with a slight cringe, yet grinning ear to ear. That’s a good postural look!

Sleaze runs the first Wednesday of the month, returning on 5th February 2014. Join Sleaze on Facebook.