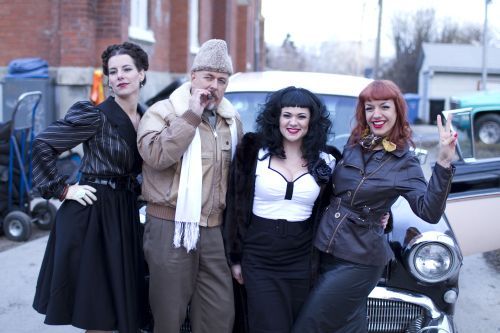 Burlexe’s Kiki Kaboom is starring in the forthcoming Burlesque Assassins. We spoke to the film’s director Jonathan Joffe about Kiki, burlesque and much more…

How did the idea for Burlesque Assassins come together? The Burlesque Assassins was very much a community project. I had written a very simple indie film script that was ‘the burlesque troupe is in trouble and needs to put on a big show to save the theatre.’ But I wasn’t overly enthused about it.

So I started going to burlesque festivals and meeting performers and producers and fans. I got to know them and got to know the scene, and made some amazing friends and just started talking to people. Turns out they had great ideas.

Burlesque performers are amazing entertainers, and Burlesque is filled with an amazing sense of style and adventure and romance and irreverence. I just listened to everyone’s great ideas, put all that together and voila! The Burlesque Assassins. Their Mission: Seduce and Destroy.

What’s it all about? The Burlesque Assassins is a story about a group of burlesque performers turned spies killing bad guys to jazz and rock ‘n’ roll. It’s a spy comedy set in the 1950s as our cadre of quirky burlesque heroines save the world from a trio of cold war super-villains… Joseph Stalin, Mussolini Jr., and The Clone of Hitler.

Boa’s and pasties and fans become deadly weapons in the hands of these fatal femme fatales. And of course it is all strung together by a love story between Burlesque Assassins founders Johnny Valentine and Katarina Molotov. It’s action, it’s romance, it’s comedy, it’s intrigue, it’s sultry… it’s Burlesque Assassins. 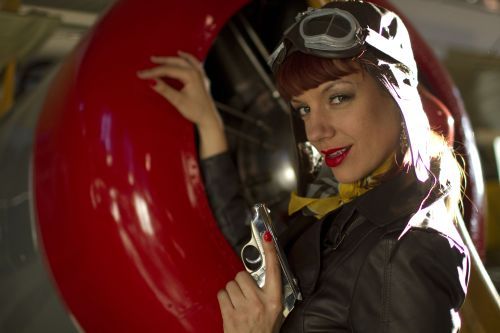 What was the most burlesquey moment on set? On set… perhaps the scene where Kiki’s character Bombshell Belle is seducing The Clone of Hitler. Without giving too much away, she has lured him into her dressing room to assassinate him.

She is doing a striptease which is supposed to be both comedic and sexy. That’s not an easy combo to pull off, but Kiki is a master of both. The scene turned out so well. Utterly ridiculous and yet still sexy.

Off set, any of the numerous parties where cast and crew got together. There was an amazing bond between them. There were parties, there was alcohol, there was nudity, shenanigans ensued. Very burlesque.

How did working with burlesque fit in with your personal style as a director? For most directors working with burlesque performers would have been a huge gamble. A burlesque routine is very different from acting for film and in the case of Roxi D’Lite we were hanging our film on a star who had never performed a word of dialogue in her life. Risky. But over the years I’ve worked with actors of all levels, specifically going out of my way to work with actors with very little experience as well.

I’ve developed my own set of tools for getting the performers in touch with their characters in a way that works for them. They have lots of input and lots of creative say, which also tends to make people much more invested in the film. That was huge for this film. It was the difference between being a low budget film and a cheap film (because nothing says cheap like bad acting). And together we totally pulled it off.

What do you hope the film to achieve? First, I wanted to make a film that I love. I love this film, so that is incredibly satisfying. When I’m 80 I will happily pop this in the old timey bluray player and have blissful memories of all the amazing times we had making this super cool film.

Second, the film needed to be both a critical and financial success. That seems to be happening.

Third, the loftiest goal of all, I sincerely hope that the film can raise the profile of burlesque. This is an amazing art-form. Theatre at its best. I really hope the film can act as a gateway to get more people introduced to this fantastic subculture.

People like Roxi D’Lite and Kiki Kaboom and Koko La Douce are stars, not in the cheap, modern, disposable, Paris Hilton sense of the word but in the classic Hollywood grand sense of being a star. Huge talents with huge hearts bringing beauty and laughter and joy to their fans.

What has burlesque taught you? Rather than say what burlesque has taught me, I will say what it has done for me. Burlesque has reinvigorated my love of film. I got into film to love what I do. But it’s a ton of work and it’s competitive and often very unrewarding.

Working with the burlesque community has really re-invigorated me in every sense of the word. When I started this film I felt like a forgotten director living in an isolated corner of Canada. Now I feel like a part of this giant and exciting international scene of amazing and talented people. I have friends all over the world now. It’s so exciting.

Find out premiere information  and more on the official website. Enjoy our Kiki Kaboom Burlesque Assassins interview and the trailer.

We look for burlesque’s influence on the world and Burlesque Assassins is sure to be one such source.