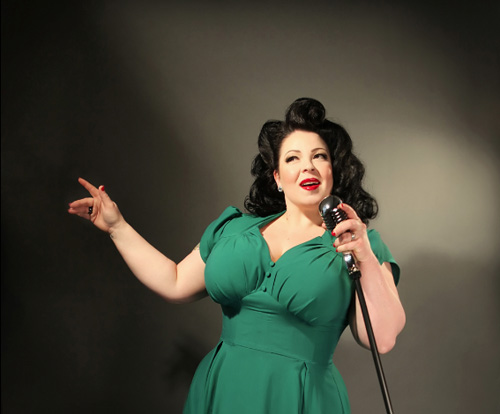 Burlesque singer Kiki DeVille has made an impact this year by bringing a touch of burlesque to The Voice of all places. Burlexe caught up with her post-show to talk dreams, charity work and of course, Will.I.Am…

Burlexe: How and why did you get involved with burlesque?

Kiki DeVille: About four years ago, I got asked to play in the interval of a burlesque night. As soon as I experienced the crowd, I decided it was the world I wanted to be in. I started my own night for a while for the charity Derian House Children’s Hospice, and through that I got to know a lot of people in the North West scene. Since moving to the UK from Australia via Los Angeles, I had struggled to find the part of the music industry that I could settle in to and feel at home. Burlesque became that for me. The first place in my 25 year career that I felt like I was supposed to be there and I was made for it. The community spirit, the support and the camaraderie cemented the decision for me. I’ve never looked back.

What’s been your career to date?

Twenty-five years professionally. I was a session singer, working on commercials for TV and radio in Australia and spent 10 years as a civilian singer in the Australian Army Band with whom I performed at the Sydney 2000 Olympics and Melbourne Concert Hall. I moved to the US in 2003 and became a house singer at Babe’s and Ricky’s Inn, one of the oldest Blues clubs on the West Coast of the USA.

Sydney 2000 Olympics and The Voice.

Is there another more – dare we say?! – ‘normal’ life that happens outside of burlesque?

I run my own singing school called Vocal Dexerity. I specialise in teaching dancers and work out of a dance school with my students focussing on working up to being a triple threat. I am also a wife and mummy to four children: Alec (23), Paris (18), Arlo (5) and Dexter, who would have been six but died when he was still a baby.

What makes you unique on the burlesque scene?

I have tried very hard to try to be a little bit different, in both my song choices and my engagement with my audience. I prefer to think of myself as an entertainer rather than just a singer and I work with my audience to help create an experience they will remember. I incorporate a lot of comedy in to my sets, through both song and general chatting with my crowd. This has helped me gain a loyal group of fans who regularly enjoy my shows.

Why did you decide to do the Voice?

I wanted to do The Voice for a few reasons really. Firstly, I adore burlesque and cabaret/variety. Within this colourful scene there is an absolute abundance of talent. Over recent years on some other talent shows, ‘cabaret’ has been used like a dirty word (ie: “you’re just a cabaret singer”). Some of the most talented people I have come across in my 25-year-long career have been in cabaret and burlesque. People like Abigail Collins, Vicky Butterfly and Kiki Lovechild. I knew that if I could just get past that initial audition that I would have a unique opportunity to showcase just a very small amount of what is out there in the diverse world that we work in. I also wanted a platform to show what I could do to try to break in to the London scene, whilst maintaining some integrity around my talent.

The other reason is a profoundly personal one. My husband Christopher Robinson and I had our first son together, Dexter, in September 2007. The day after he was born Dexter was diagnosed with a fatal genetic condition called Zellweger Syndrome. We were told he would survive no more than six months. Ultimately, he survived just four weeks and three days and we held him as he took his last breath at Derian House Children’s Hospice in Chorley, Lancashire. Since Dexter’s passing I have become a Parent Ambassador for Derian House, speaking at public engagements on their behalf and fundraising as much as possible. Derian, along with Together for Short Lives (formerly Children’s Hospices UK), do an incredible amount of good throughout the UK, with only 9% of their running costs coming from government funding. I wanted to both raise awareness and also show other families like ours, that you can come out the other side. You won’t ever be the same again, but that’s ok. It’s ok to be fun, to have fun, to laugh, even after you’ve lost a child, and importantly, its ok to live your dreams.

What did you get out of the show?

A great deal of confidence! I’m a big girl, and it can affect my confidence, even though I work in such an accepting community. The show gave me the confidence to approach people I would never have approached before. I’ve always been confident in my ability but never felt like I had enough to put myself out there… now I do! And from a purely commercial point of view, I am now sponsored by both 20th Century Foxy and Besame Cosmetics, so that’s a nice kick back too 😉

Will.I.Am: how much help does he give the contestants really? Was he right for you?

Will was PERFECT for me! I don’t think anyone else would have got me. One of the many things we do well in burlesque is branding and Will adored mine. He knew and loved that I knew who I was. He kept telling me, on camera and off, that I was already there. I was already a star and that I should have my own TV show! He said that he distinctly remembered the day he met Lady Gaga because she was there already… he then told me he would always remember the day he met Kiki deVille for the same reasons. Will loves someone with a plan, and he knew I had a good one coming out of the show. There was a part of me that was kind of happy that he was so visibly upset at losing me in the Battle Rounds. We got along really well. I gave him his Boylesque name (Will-Da-Beast) and I know that I will have someone that watches over my career always in him and his team, especially right hand man, Dante Santiago. Don’t get me wrong, he’s not AS hands on as some of the others, but he is Will-I-Am!! He’s an actual mega-star!

What has burlesque taught you?

Burlesque has taught me that talent can be so multi-faceted. I used to think that being the best singer was the most important thing. Now, for me, it’s about being an entertainer: being funny, and having fun, and not forgetting that from a technique point of view. I know what I’m doing, but that that isn’t the be all and end all. It’s brought the audience back as the focus for me, which after many years of being a blues and jazz singer (which can sometimes be very insular), I needed to do. It’s taught me that community matters and it makes your career stronger and ultimately more enjoyable, to be part of something bigger. I love it for all those reasons.

What is the dream or grand plan?

I’m not going to lie, I would love to be a high profile Burlesque singer! I would love to work along side people like Kiki Kaboom and Miss Polly Rae, and learn what I can from them, as well as represent our incredible community on the world stage (Ok, I admit, BHOF is definitely on my list)! Mostly I want to continue to develop (I am a BIG believer in Continuing Professional Development), I want to work across the country and Europe and I would LOVE more than anything to become a Patron for Derian House.

Find out more about Kiki DeVille.