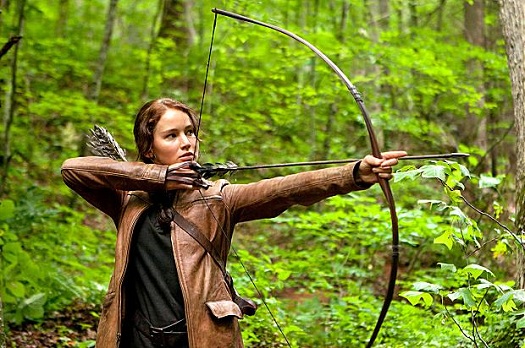 The lead character in Suzanna Collins’ hit series The Hunger Games has been making waves for all the right reasons and we’re not just talking about the Katniss Everdeen braid either.

The Hunger Games… well well well. It’s a good book but maybe we didn’t expect such a level of success for the film. With most internet debates shrugging off the tale as a Battle Royale derivative (which is ridiculous and irrelevant if you’ve actually seen both movies!) we wondered where Katniss sits on the scale of Bella Swan to Ripley? Burlexe invited UK blogger Lauren Ball to explain…

After all the hype and anticipation, the numbers are in and the odds are in Katniss Everdeen’s favour.

The first instalment of The Hunger Games is raking in millions at the box office and critics have been largely positive, especially regarding its star, Jennifer Lawrence, who has carved a new role as heterosexual pin-up and acceptable girl crush in the hearts of cinema-goers worldwide. You could call her The New Megan Fox, if you’re into that sort of thing.

But is she also the new poster girl for female empowerment? Is Katniss a guiding light for young girls lost in a patriarchal labyrinth? It’s a lot of pressure for someone so distracted by just trying to stay alive. Still, at least she’s doing a better job than Bella Swan.

Comparisons between The Hunger Games and Twilight are inevitable – both are franchises based on books aimed at a young adult readership with hoards of teenage fans. Both have enjoyed incredible box office success. The urge to compare and contrast heroines Katniss and Bella is too strong to resist, as a quick Google search will prove, but it has to be done – so sit down and buckle up. 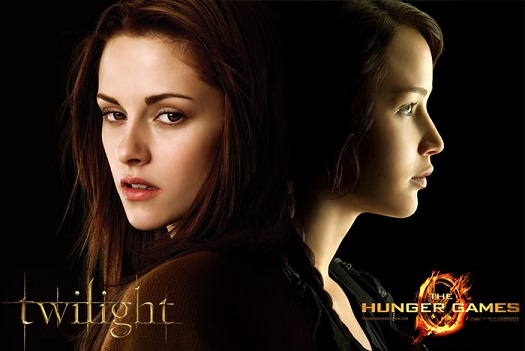 If young people find role models in popular culture, and they do, then it stands to reason many will look to Twilight, having nothing else of equal scale. There hasn’t been such a phenomenon since Harry Potter, which for all its majesty is male-centric and offers an uninspiring idol in the bookish, sexless, serial teller-offer Hermione.

Twilight‘s Bella is easier to identify with given her startling lack of character – the few descriptions offered in the original text are delightfully vague and could apply to almost any teenage girl, and even when transferred to the big screen and given Kristen Stewart’s face she doesn’t exactly sparkle (pun intended).

There’s nothing to aspire to beyond the possibility of supernatural romance and being so inexplicably captivating that powerful, dangerous boys will fight over you. I feel so very sorry for any girl growing up wanting to be Bella. But it’s OK that she’s in what is tantamount to an abusive relationship because he’s drawn to her, yeah? Of course she should beg him to hurt her because he LOVES HER, yeah? Of course she wants to be domesticated – isn’t that the point of having a fanny?

Sent into the cinemas in the break between Breaking Dawn parts 1 and 2, The Hunger Games’ brand new female-centric franchise is a welcome injection of spirit, presenting Katniss as a face of rebellion to counteract Bella’s pouty subservience.

She is a tough cookie: brave and resourceful and more than capable of looking after herself. Suzanne Collins’ text plays around with gender subversion, giving Katniss the hunting skills while her male counterpart sticks to baking and icing cakes.

The romantic elements of her story haven’t been key to its promotion – perhaps this is helping to attract a broader range of viewers, but it also reflects the heroine’s own mind, which is rarely occupied by thoughts of romance. Whatever the reasoning, Lionsgate are onto a winner: the opening weekend grossed $155 million and was the third-best debut of all time.

Both Katniss and her non-fictional alter ego have been catapulted into our collective conscious, and with three more films lined up, both look set for pop culture glory. If a hugely influential pop star (*cough* RIHANNA) will go back to a man who beat her up, then we could do with a bona fide action hero to knock some sense into everyone.

She seems unaware of the concept of birth control, which is incongruous (come on, they’re in THE FUTURE) and downright unfair, given that access to condoms would make her life choices a hell of a lot easier. She spends much of the series declaring the traditional route of marriage and motherhood disagreeable but (spoiler alert) ends up following it anyway. To take Katniss Everdeen as a true example of female empowerment doesn’t stretch too much beyond women possessing some typically masculine qualities and kicking some ass before whimpering a bit and apathetically conforming to the traditional female role. Ellen Ripley she ain’t. 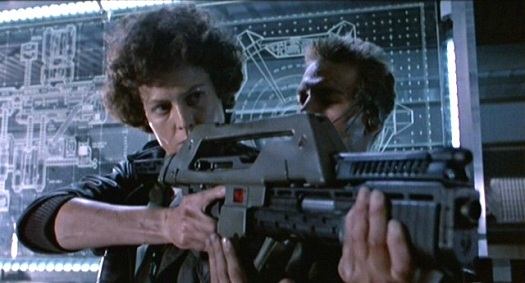 (Image from Everything Action)

The Hunger Games isn’t claiming to be a seminal feminist text, but it’s an exciting story fronted by a young girl who does more than mope around thinking about boys. There’s a gap in the market for a teen-friendly feminist icon and I don’t think we’ll find her in the arena, but in the wake of the Bella Swan and Rihanna double team effort championing the hitherto unknown Acceptable Domestic Violence trope, I’ll cheer Katniss’ corner any day of the week.

Thumbs up for the Girl on Fire.

Check out more from Lauren Ball and Burlexe here.

We look to influential and successful women as our inspiration and Katniss Everdeen is one such woman.

(Main image from The Times by Murray Close)