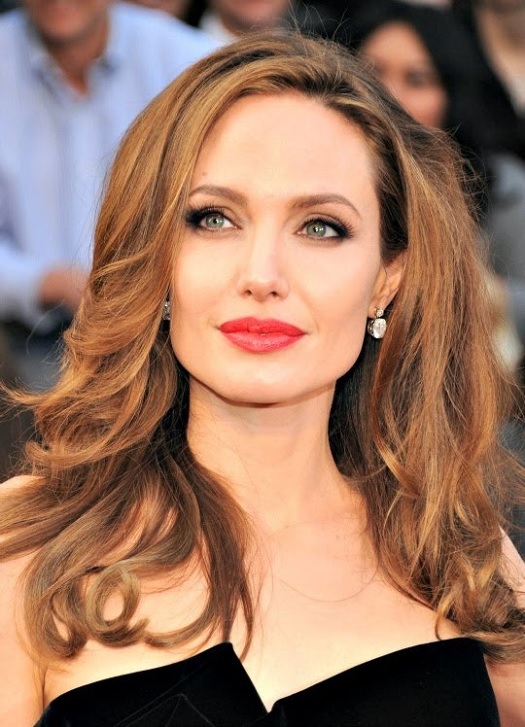 This month there’s a bevvy of wonderful women in the news and gossip columns. Here’s our run down of fashion, beauty, music, comedy and sporting news that has got our tassels in a twirl.

We take a look at the empowering, fabulous and brave women in the news this month. Whether they dare to be different, own their body or speak some words of wisdom that are worth sharing.

Actress and director, Angelina Jolie, wrote an article in the New York Times titled ‘My Medical Choice’. The star announced her decision to have a preventative double mastectomy.

Following the illness and death of Angelina Jolie’s mother, from cancer, she sought genetic testing. The results revealed that she was 87% likely to develop breast cancer. Sadly, two weeks after her announcement her aunt also passed away due to breast cancer.

She’s not the first celebrity to have a masectomy, as both Olivia Newton John and Christina Applegate have spoken of their’s. Sharon Osbourne also went through the same preventative procedure.

In the article Angelina Jolie speaks of the effect on her family of both the surgery and her mother’s death. She went onto acknowledge that not everyone had her resources but she encouraged women to get tested.

A lot of discussion has circulated since, including debates on what it is to be a woman and how an actress’ career is reliant on her appearance. In the article she said, “I do not feel any less of a woman.”

She added, “I feel empowered that I made a strong choice that in no way diminishes my femininity.” Hadley Freeman wrote a wonderful article on this subject for The Guardian called ‘Angelina Jolie has done something extraordinary’.

This month the reigning Queen of Burlesque, Imogen Kelly also shared her story.

Supermodel Gisele Bündchen is the new face of BLK DNM. She worked with the brand’s creative director, Johan Lindeberg, who photographed the new campaign. He convinced the hugely successful model to go without make up and hair styling for the shoot. The photos are yet to be revealed but we can’t wait to see them and celebrate them.

“I loved his approach because I feel like women should be really real and raw and it doesn’t really happen anymore [in fashion photographs],” she told Fashionista.

“I love that feeling of, you know, we are women – we are so different. Our imperfections are what makes us unique and beautiful. He gets that. He’s not trying to retouch you or put a pretty light on you. He’s not like, ‘You’ve got to look a certain way.’ He’s like, ‘You are you.’” For some Photoshop controversy read on…

We completely agree with this perspective, it’s even in one of our Burlesque Monologues. 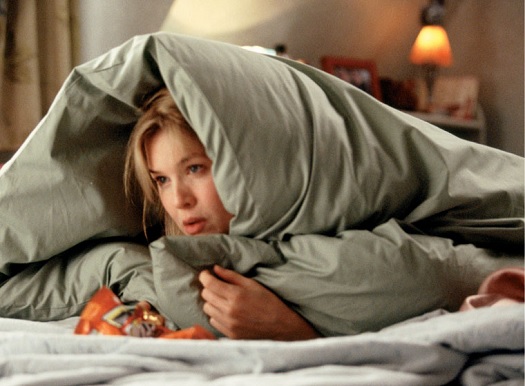 She may be fictional but she’s back. The best-selling author Helen Fielding is bringing back Bridget Jones for a third book. She announced, “My life has moved on, and Bridget’s will move on, too.”

Bridget Jones defined a generation. She was body conscious, kept count of her intakes and still did them anyway, unhappy in her career and love life but she went out there to change it. Hilarity ensued.

From the newspaper column beginnings of the 90s, Bridget Jones will now be facing an uphill battle. In a world of a saturated blogosphere, ahem, the über cool debauchery of Vice and tmi of Girls, will she still be relevant? Due out November 2013, will you be reading?

Get more titles for your reading list with Ten Must-Have Burlesque Books. 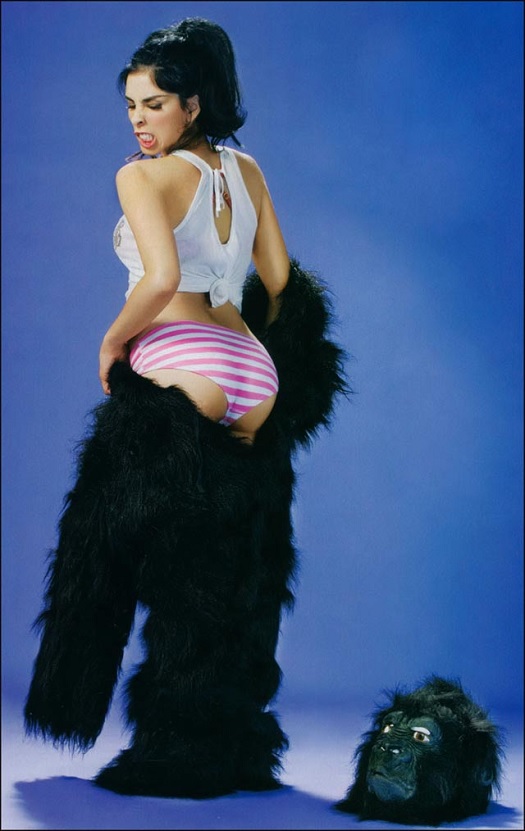 For YouTube Comedy Week, Sarah Silverman teamed up with Will.I.Am to make this spoof music video. The comedienne is known for her sexy-baby voice and provocative, out-there humour. In equal measure.

Find out about our favourite burlesque clown, Audacity Chutzpah. 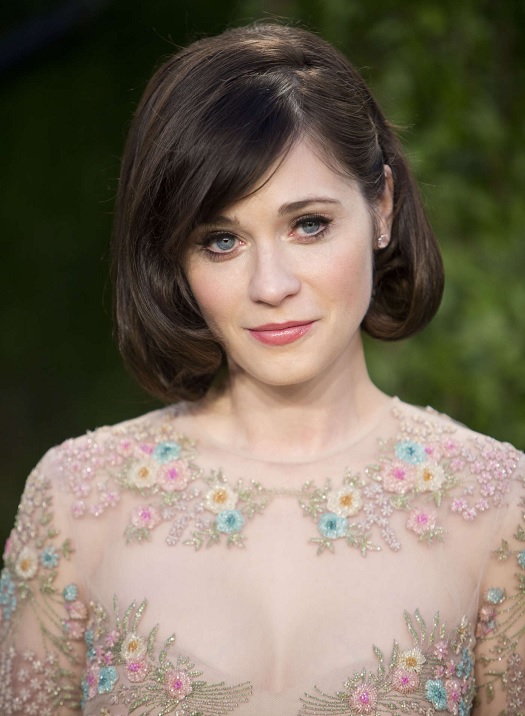 Zooey Deschanel has been busy this month and not just with her TV show, New Girl and growing out her bangs. Oh no. She also made her directorial début.

The multi-instrumental beauty began singing in a jazz cabaret show in 2001. Now her band, She & Him are on their fourth album and Zooey Deschanel took a new creative leap in her music career.

She released the new video for ‘I Could’ve Been Your Girl’ on HelloGiggles.com. The pro-female and pro-femininity website also has her as their co-creator. Phew. Check out the new She & Him video:

See her letter to Vogue in Zooey Deschanel We Salute You! 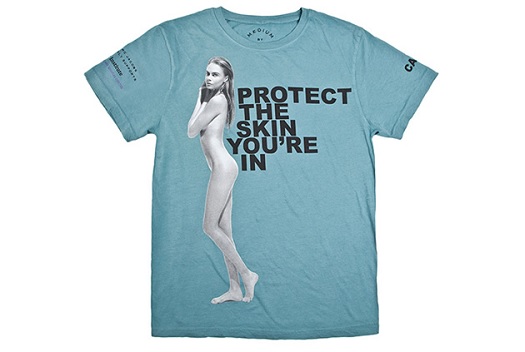 This week Marc Jacobs has continued his ‘Skin Tee’ series of t-shirts. The latest top model to strip off for skin cancer is Cara Delevingne. All proceeds continue to go to NYU Skin Cancer Institute. You can get the green tees on MarcJacobs.com.

Cara Delevingne has also supported the career of her ‘wifey’. The it-girl model has starred with Rita Ora in her new ‘Facemelt – The Remix’ video that was released on Hunger TV:

Be inspired by The Wisdom of Gloria Vanderbilt… 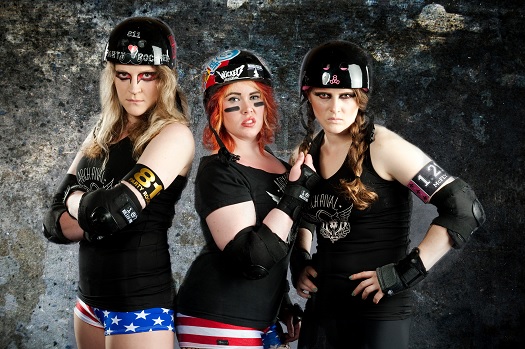 Reddit user, Copywriteher, got her photo taken at a Roller Derby conference. Receiving the pictures back from the photographer she realised her images had been, “visibly photoshopped to look skinnier.”

Speaking out against unwarranted photoshopping she said, “I play roller derby, a sport where all sizes are welcomed and encouraged and where we focus on our feelings of empowerment, and building our strength. I thought taking some photos would be fun, but now seeing myself get a magazine cover treatment, I’m just angry.

“I’m OK with how I look, and if a conference wants to photograph REAL roller derby players, then they should deal with the fact that they come in different shapes than a typical model.” Here here! 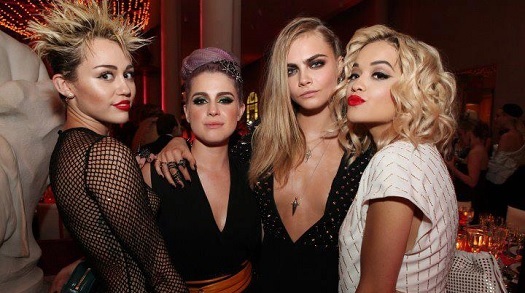 Known as one of the chicest events on the fashion calender, The Met Ball, brought out the celebs in their droves. This year’s theme, Punk: Chaos to Couture, however, has split opinion.

Young starlets like Miley Cyrus, Kelly Osborne, Cara Delevingne and Rita Ora were self-papping their way through the evening but they weren’t alone. Madonna posted this pic (below) on Instagram saying, “Tidying up before the #metball.”

Everyone may be whispering about Miley’s electrified hairstyle and gleefully awaiting her meltdown. Kelly Osbourne probably offended someone. Cara Delevingne kissed a girl and seems to have liked it. But Madge still turned heads with her rebellious outfit and got the housework done. All hail Madonna queen of punk.

Check out Madonna’s MDNA costumes – with some help from Swarovski. 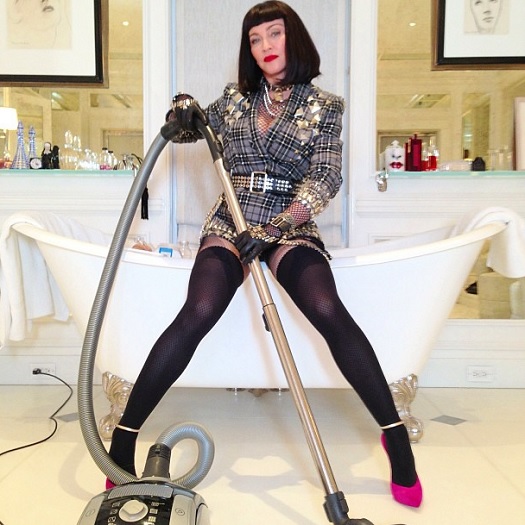 Whether it’s a hit or a miss, Sarah Jessica Parker’s wardrobe choice definitely made her stand out as a Met Ball maverick. 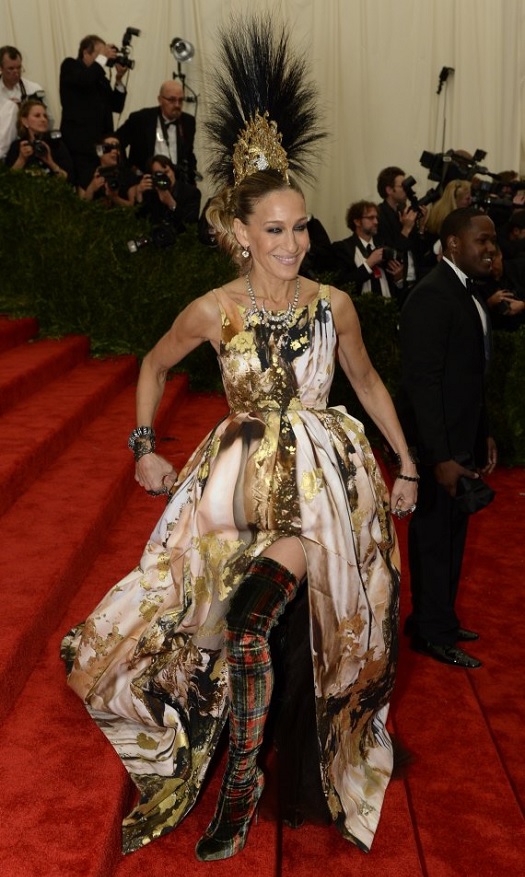 Another controversial woman at The Met Gala was Kim Kardashian. After all the bad publicity her baby bump has already received, this ensemble hasn’t helped matters as the debate rages on. Bravely, the reality TV star refuses to stop parading her natural pregnant figure and more power to her. 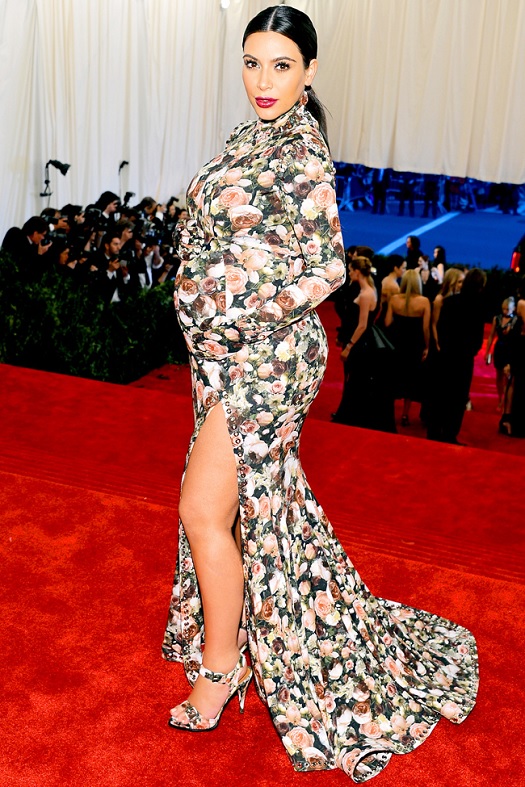 They weren’t the only ones wowing onlookers. Beyoncé nailed the punk chic theme, Anne Hathaway‘s new bleached locks complimented her just the right side of risqué gown and Jennifer Lopez showed off her cruves in animal print.

Take a look in the celeb’s dressing rooms on WhoSay with Jessica Biel, Coco Rocha, Nina Dobrev and now look inside the biggest party of the year: 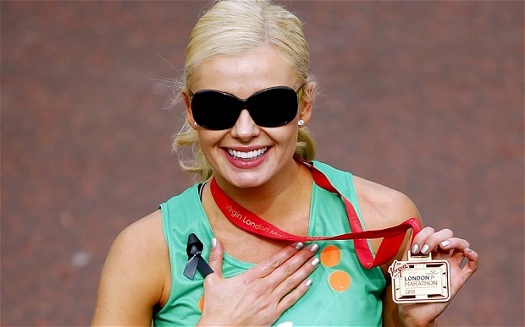 A media storm has been brewing ever since Jan Moir of The Daily Mail accused Katherine Jenkins of being, “fame-hungry.” The article slammed the soprano singer because she allegedly wore make-up and tweeted during the London Marathon.

Since the article, Katherine Jenkins has made a wonderfully dignified response saying, “I adore & support other women and I only wish you could do the same.”

She added, “Next time you run a marathon Jan, I will be the first to sponsor you, because I know how much guts, hard work & determination it takes.”

The journalist has since received a backlash from other papers. Giles Fraser of The Guardian called it, “sheer tabloid hypocrisy.” While Eva Wiseman, of the same paper, wisely said, “The joy of make-up lies in the choice.”

If you want to make that choice, try Burlesque Eye Makeup Tips for Beginners. 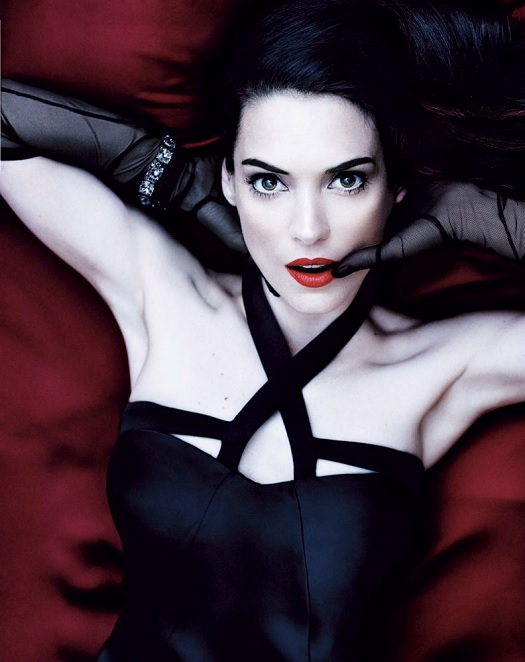 American actress, Winona Ryder, has been featured in a set of beautiful boudoir fashion snaps. Even though, at the beginning of her career she was told to quit because she wasn’t “pretty enough,” according to the HuffPost.

The pixie vixen spoke out about ageing in Hollywood saying, “I’m at that age I’ve been warned my whole life about.”

She also admitted to being criticised for signs of ageing and said, “I have a little bit of traffic now on my forehead which I’m very proud of actually.” Adding, “I’m excited about this new phase.”

If these pictures are anything to go by, the critics are wrong because Winona Ryder looks amazing at any age.

We like to find burlesque’s influence in the world and these slightly OTT women in the news lend themselves nicely to burlesque. Whether it’s female empowerment, glamour or displaying yourself for everyone to see.