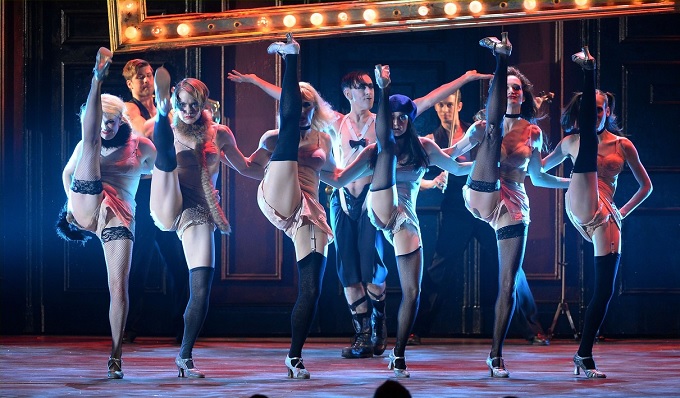 Awards season 2014 is just beginning. Luckily for us there’s a bevvy of new hairstyles and fabulous frocks to drool over. Here’s our favourite fierce ladies who walked the red carpet without towing the line.

This year it is yet to snow but we’re sure to see plenty of sparkles as we can finally we can nab those red carpet looks for SS14.

First up was where TV and film meet, the Golden Globes, followed by The Grammys, BAFTAs, BRITs and Oscars. Plus, The Laurence Olivier Awards, MTV Movie Awards, TV BAFTAs 2014, CFDA Awards and Tony Awards. Now with the VMAs and The Emmys. 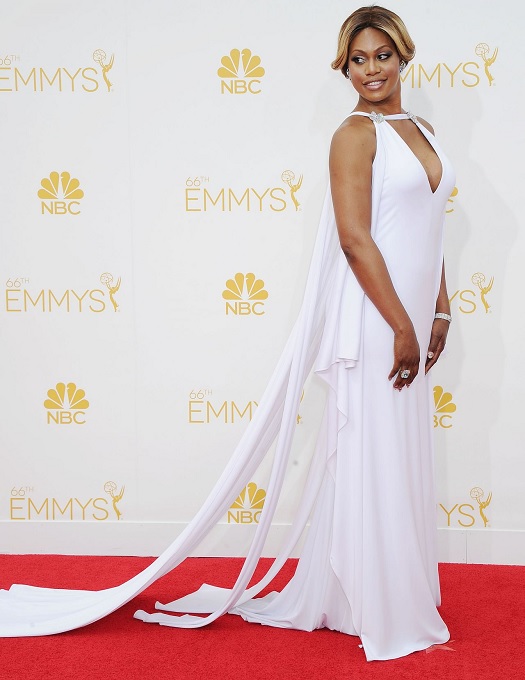 At this year’s Emmy Awards the carpet may as well have been painted orange with the amount of actress’ from the hit Netflix show. Yet, Orange is the New Black actress, Laverne Cox, took the crown with this goddess gown.

Unfortunately, the actual awards show has come under fire for a lack of feminism. Though, in its defence, some women tried to shake it up this year. 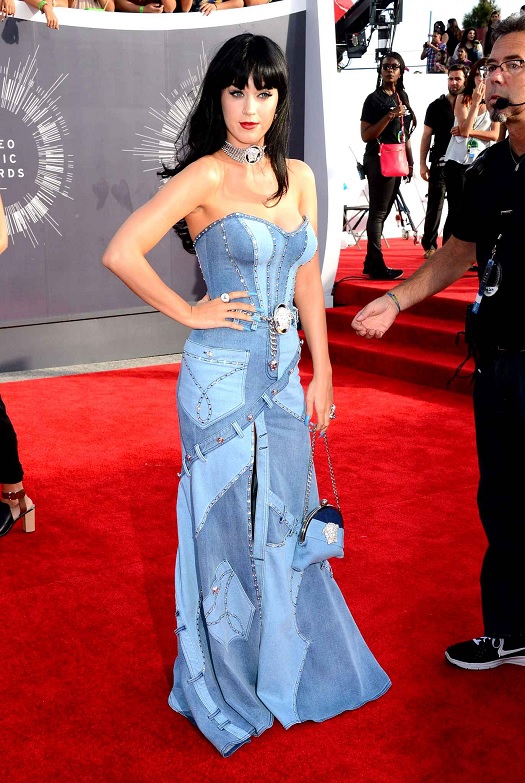 The VMAs are known for being out-there, whether it’s the fashion or the performances. This year saw Katy Perry embrace the whimsy and fun of the event with this outfit.

She channelled 90s pop queen Britney Spears with her all-denim look and event brought a friend to be her Justin Timberlake. Luckily, Britney approves.

If you’re not a fan of that particular decade then the performances a lot more to talk about. Nicki Minaj brought back the “accidental nip-slip” whilst her own brand of feminism has been called into question.

Then Beyoncé showed off her feminist side and everyone loved it. You can catch up with the full show here. 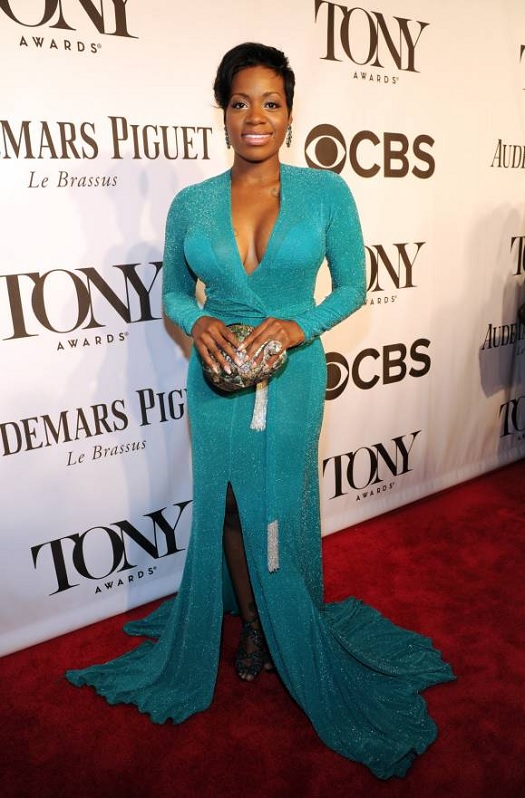 The fabulous 2014 Tony Awards saw celebs bring the va-va-voom and no one more so than singer Fantasia. That dress and those curves certainly bring out our green eyes monster.

We’re all about the love for this awards season but if you’ve got that itch to bitch, head to Tony and Lorenzo for all the goss. Otherwise, enjoy the wonderful Alan Cummings performing with the cast of Cabaret. 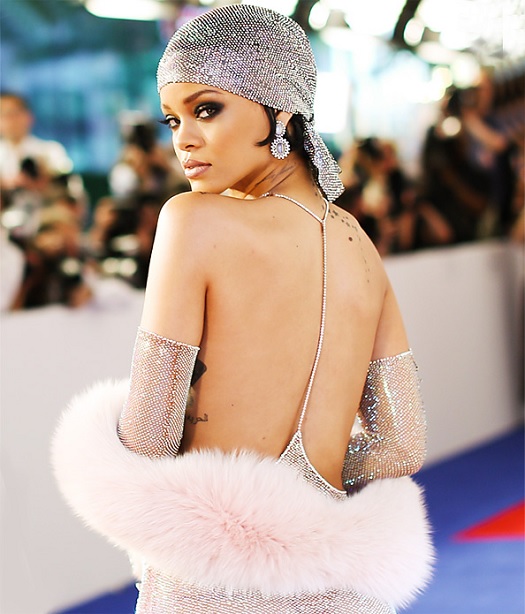 At the Council of Fashion Designers of America Awards 2014, Rihanna got tongues wagging for more than one reason. She attended the event to receive the Fashion Icon Award from Anna Wintour.

What got people really talking, however, was her gown. The custom Adam Selman fishnet dress, gloves and headscarf were embellished with over 216,000 Swarovski crystals. Wowee.

It also left little to the imagination. Rihanna cited burlesque heroine, Josephine Baker as an inspiration for the dress which only made us happier.

Happy birthday to the late Josephine Baker! You have and will continue to inspire us women for decades to come! pic.twitter.com/VVizGnvoen 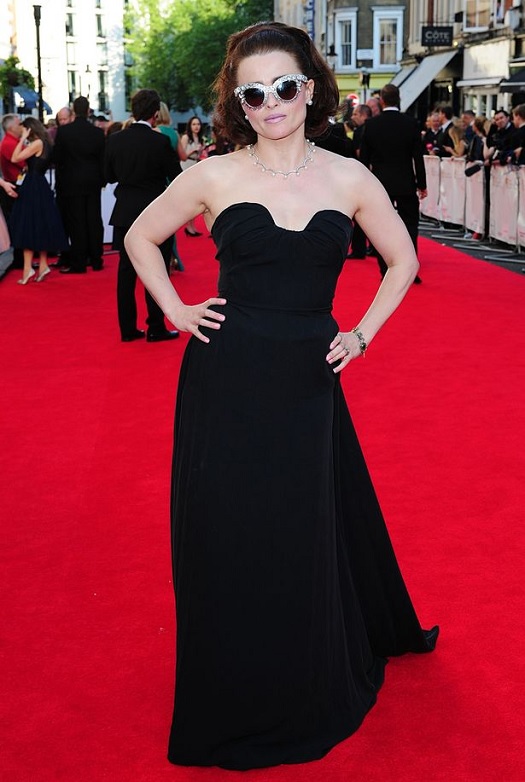 (Image from The Mirror) The best actress nominee proved that a little black dress can still go a long way. Helena Bonham Carter graced this year’s event complete with 50s eyewear, proving a little eccentricity can still get people talking. 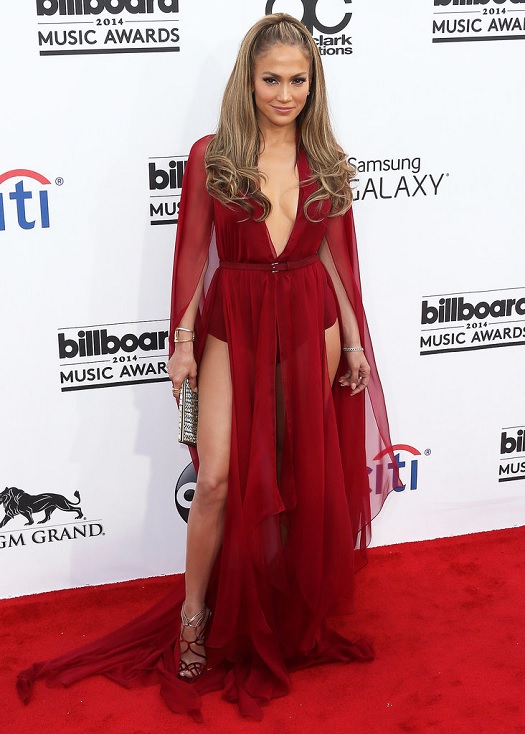 J.Lo brought back that iconic dress in a new shade (finally!!) and looked just as wonderful. She also, to bury the lead, won the Iconic Award.

According to Billboard, there was a video montage that included Rihanna saying, “You continue to break down barriers and inspire girls.” She then accepted the award from Ricky Martin and Iggy Azalea.

Jennifer Lopez said, “All you little ones sitting on the living room floor, have faith, dream big, think big,” according to Glamour. “And know that anything is possible, you never know where you might end up.” 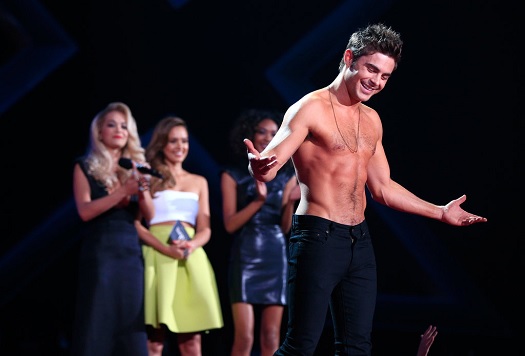 We’ll get to the best dressed soon, we promise, but first it’s the best undressed. Jessica Alba may have made a little faux pas by pronouncing his name wrong but luckily Rita Ora stepped in and stripped him off.

The internet has been immediately abuzz with pics and it’s a well deserved spot on our list. Maybe we’re just having Boylexe withdrawal but it has to be said, yum.

The Magic Mike MTV Movie Awards appearance may almost be moved into second place. Almost. Re-live it with this video: 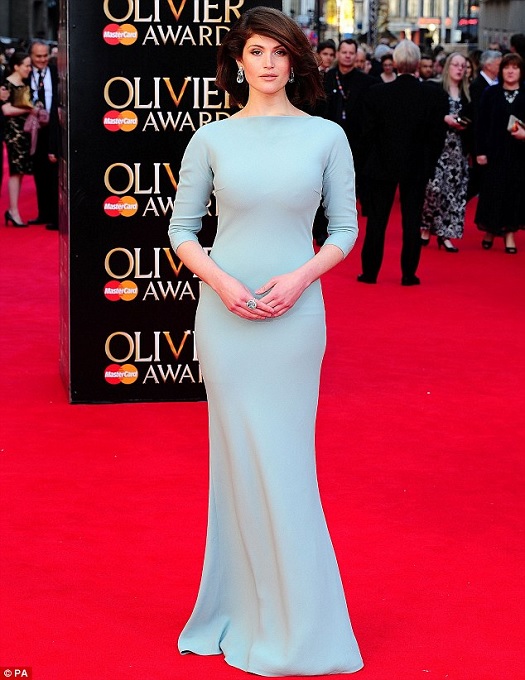 (Image from The Daily Mail)

The highlight of the theatre  awards awards season was held at the Royal Opera House in London on the same night (April 14). The Laurence Olivier Awards also attracted a star studded, if more mature, crowd. 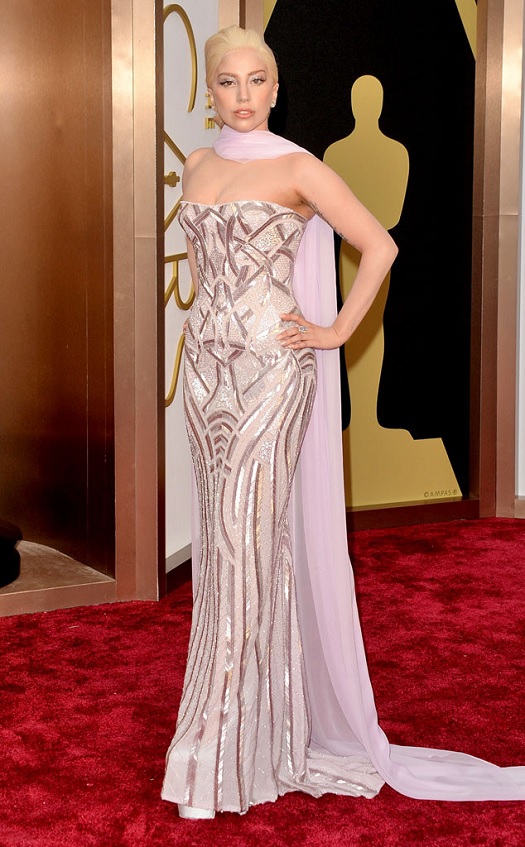 The Oscars 2014 is a classy affair dontchaknow. The red carpet saw muted tones and elegant ladies.

Yes, even Lady Gaga. It turns out the shock pop princess still can surprise. She posed for the paps with all the grace one would expect from the Academy Awards. Though some are still disappointed, you truly can’t please everyone. 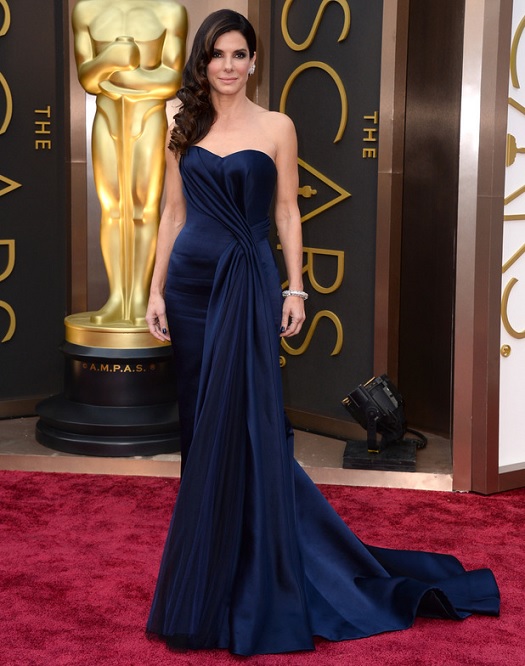 The Oscars 2014 may have seen a parade of covered up women but trains and bling were also out in force. The likes of Sandra Bullock and Charlize Theron stunned onlookers in their amazing gowns.

Oh and during the ceremony… Ellen DeGeneres remains awesome.

And Cate Blanchett shows how to do it for the girls: 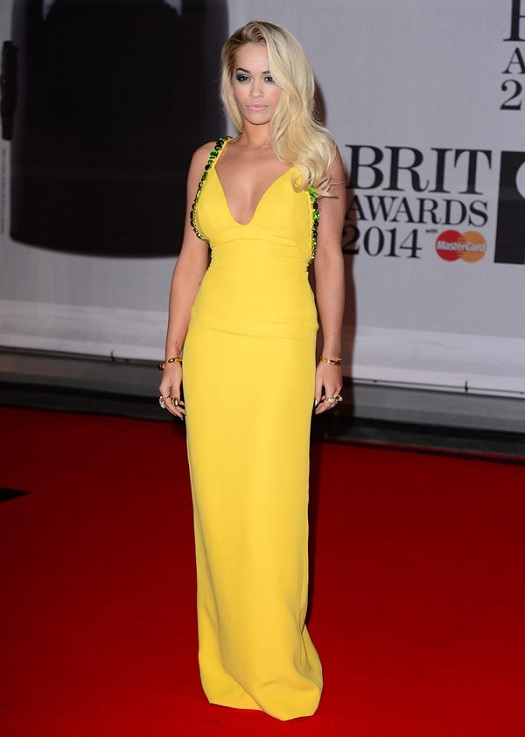 The BRITs 2014 saw some colour and daring on the red carpet. Singer, Rita Ora looked drop-dead in this stunning yellow number. 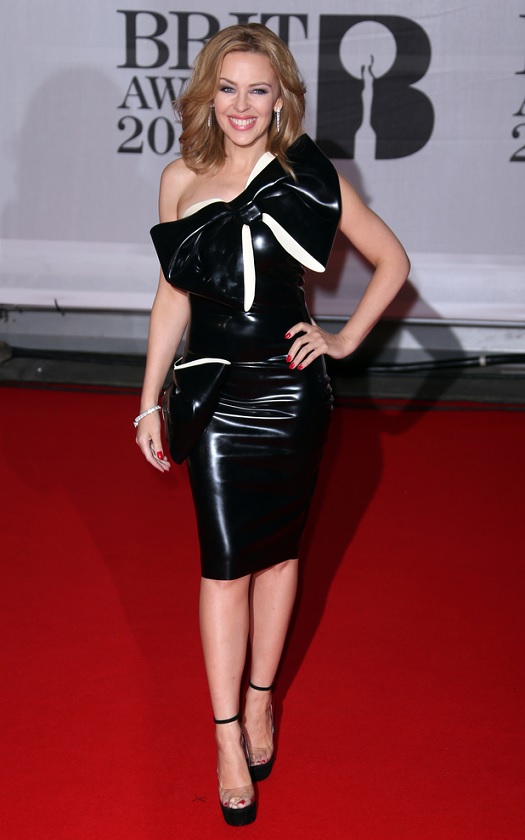 The BRIT Awards 2014 also saw Kylie Minogue in a little black dress with a twist. This gorgeous, sexy and feminine latex black bow dress is the perfect combo of fetish and chic.

We cannot get enough. And Kylie wasn’t the only fearless woman posing for the paps. Model Rosie Huntington-Whitely rocked this print patent leather dress. We wants! Both!! All! 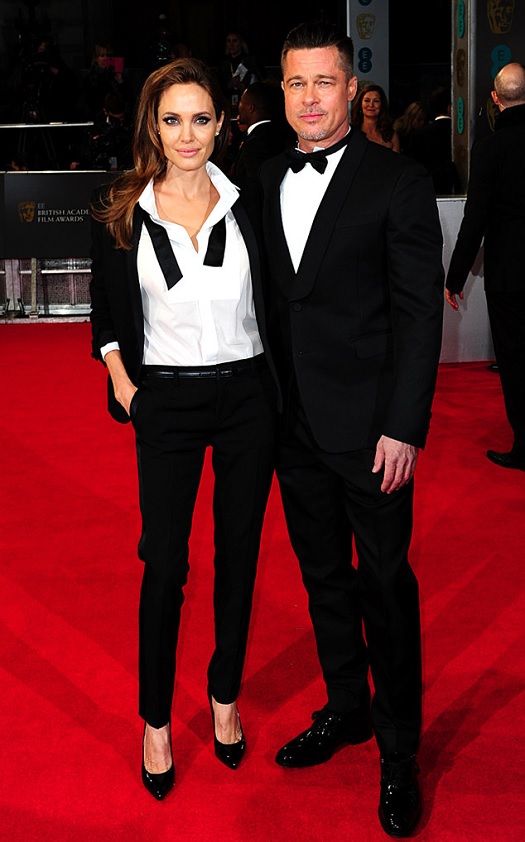 Lalaland power couple, Angelina Jolie and Brad Pitt, wowed on the red carpet at the BAFTAs this weekend. His suave getup alongside her glamour is enviable.

Their matching tuxedos weren’t the only thing people were talking about at the British Academy Film Awards. The Royal Opera House in London was abuzz with a few controversial decisions. 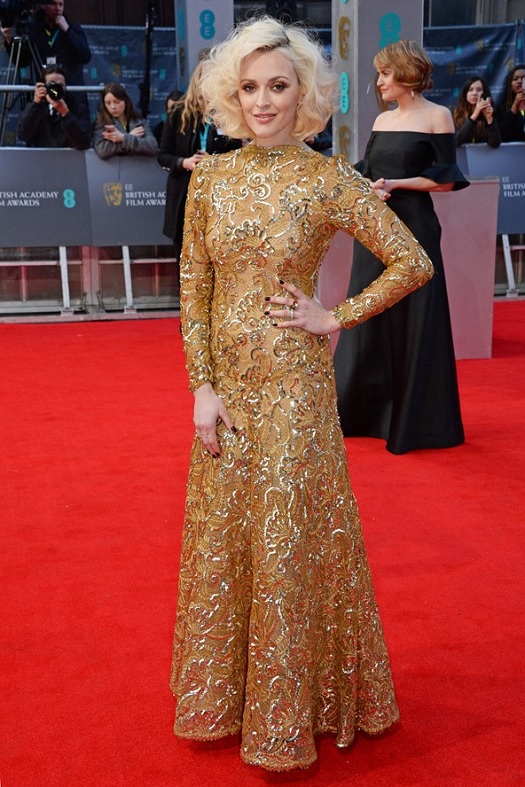 Whilst Radio 1 DJ, Fearne Cotton, looked amazing in this floor-length gown. Not to mention that big hair. Love it! 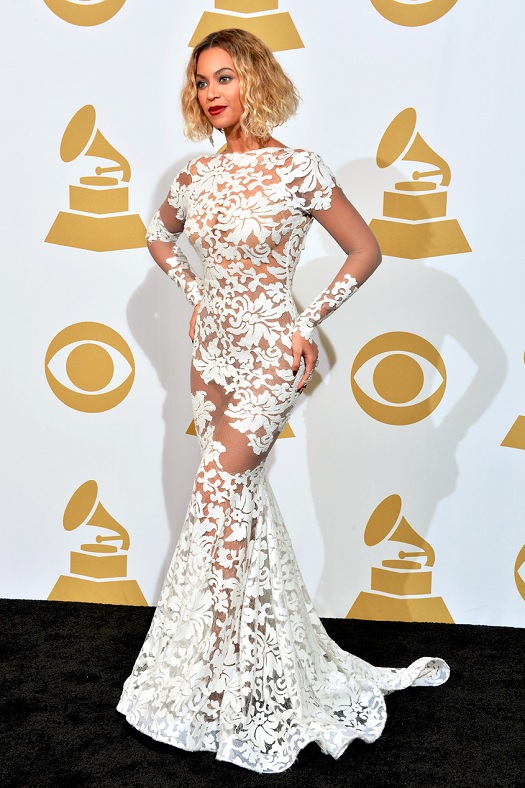 The first music awards show of 2014 was highly anticipated amidst rumours of a certain husband and wife team performing together. Excitement certainly mounted as the paps witnessed a parade of curve-defining gowns.

Beyoncé not only wowed on the red carpet in this number but her performance alongside Jay-Z did not disappoint. Watch their amazing ‘Drunk In Love’ rendition: 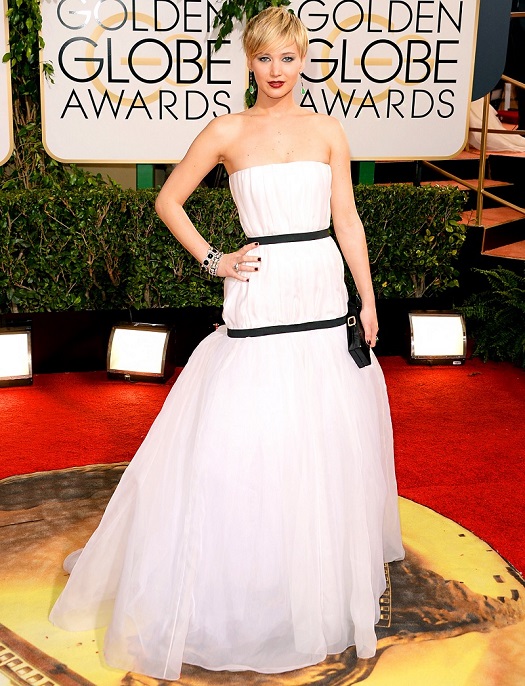 (Image from US Weekly)

The stars came out to kick off the 2014 awards season. Best Supporting Actress winner, Jennifer Lawrence (top photo), was once again in Dior Couture. As was fellow 1990-er Emma Watson.

Once again, J-Law’s dress was another internet sensation created by the actress and her fans. Now known as the Jennifer Lawrence duvet dress (Google it, trust us), it got such responses as this one below. You can also see oh so much more from The Telegraph. 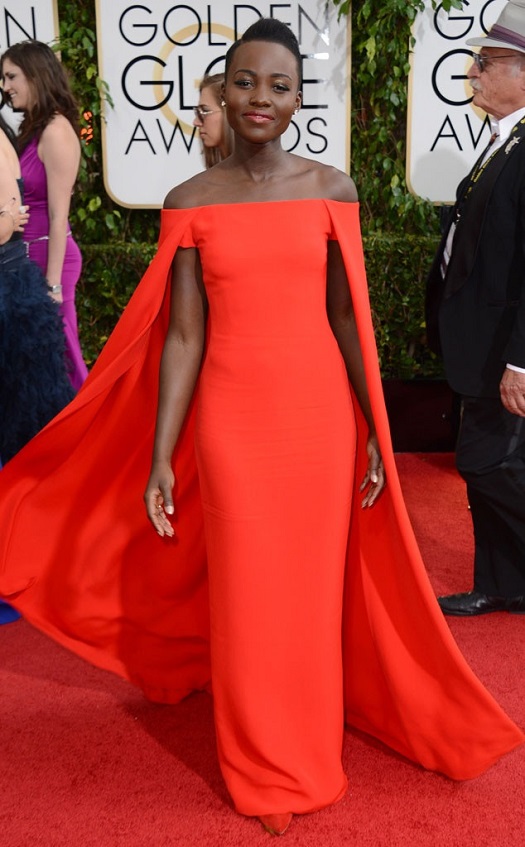 Yet 12 Years a Slave actress, Lupita Nyong’o, stood out from the crowd. Her modern, young, fun and bright dress is just what the winter months needed to shake off those blustery days. Beautiful and she has been topping best dressed celebs lists ever since. 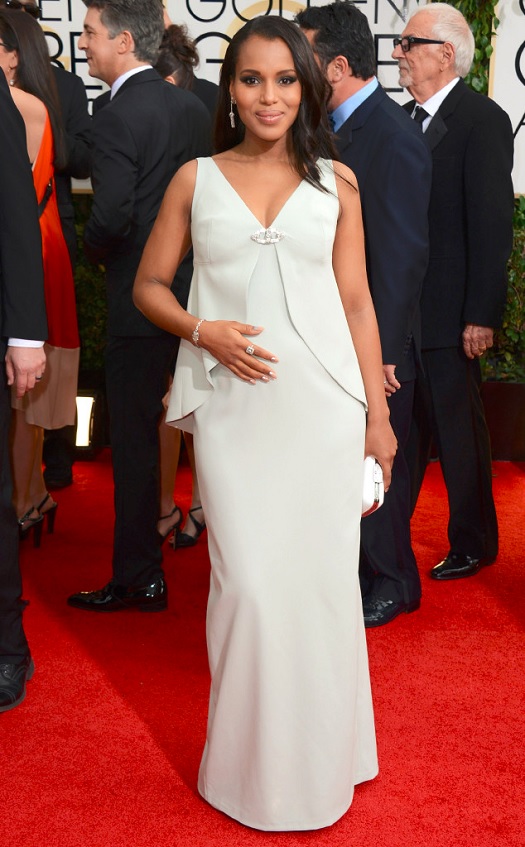 Unfortunately, 2013 saw some significant body shaming, including pregnant celebs. Fortunately, this year seems to be a celebration for expecting mothers and their fabulous figures.

Alongside Scandal star, Kerry Washington, Olivia Wilde and Drew Barrymore were also seen sporting their baby bumps. And we have to say, they all looked amazing!

Check out Best Dressed This Season 2013.